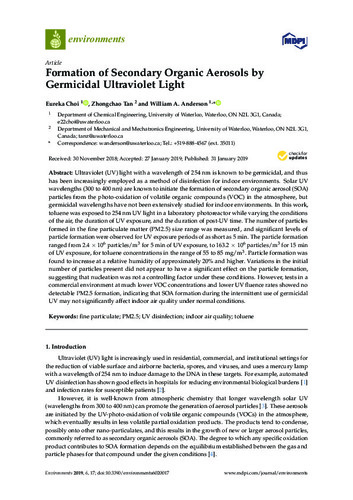 Ultraviolet (UV) light with a wavelength of 254 nm is known to be germicidal, and thus has been increasingly employed as a method of disinfection for indoor environments. Solar UV wavelengths (300 to 400 nm) are known to initiate the formation of secondary organic aerosol (SOA) particles from the photo-oxidation of volatile organic compounds (VOC) in the atmosphere, but germicidal wavelengths have not been extensively studied for indoor environments. In this work, toluene was exposed to 254 nm UV light in a laboratory photoreactor while varying the conditions of the air, the duration of UV exposure, and the duration of post-UV time. The number of particles formed in the fine particulate matter (PM2.5) size range was measured, and significant levels of particle formation were observed for UV exposure periods of as short as 5 min. The particle formation ranged from 2.4 × 106 particles/m3 for 5 min of UV exposure, to 163.2 × 106 particles/m3 for 15 min of UV exposure, for toluene concentrations in the range of 55 to 85 mg/m3. Particle formation was found to increase at a relative humidity of approximately 20% and higher. Variations in the initial number of particles present did not appear to have a significant effect on the particle formation, suggesting that nucleation was not a controlling factor under these conditions. However, tests in a commercial environment at much lower VOC concentrations and lower UV fluence rates showed no detectable PM2.5 formation, indicating that SOA formation during the intermittent use of germicidal UV may not significantly affect indoor air quality under normal conditions.