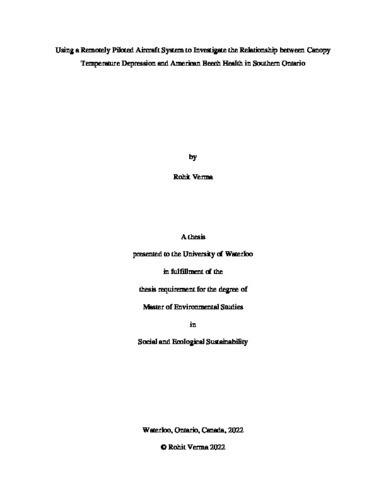 The unprecedented spread of invasive pest and pathogens, along with climate change and human activity/development is degrading forest system health. American beech trees are a principal tree species that dominates Ontario’s hardwood forests, yet are declining in numbers, primarily due to diseases such as beech bark disease and beech leaf disease, but also because of human development in environmentally sensitive forests. To better monitor American beech (Fagus grandifolia) health and identify severely deteriorated trees, innovative technologies such as Remotely Piloted Aircrafts (RPAs) can be utilized to complement the data collected by mid-altitude aerial aircrafts and ground-based surveys. Existing research has demonstrated the potential for RPA based thermography, which measure individual canopy temperature readings, to identify trees that are under water stress because of factors such as drought and foliar, stem and/or root diseases. However, whether American beech trees displaying noticeable signs in decline in health, due to factors such as foliar, stem and/or root diseases, can be differentiated from trees showing little to no sign in decline is yet to be determined by RPA-borne thermal imaging. This paper investigates whether RPA-borne thermal imaging can be a useful tool to monitor American beech tree health in Southern Ontario forests. The study was located at rare Charitable Research Reserve in Cambridge, Ontario, in semi-naturalized forests. A total of 29 American beech trees across eight different plots were included in the sample for the study and were given a health level of either “healthy”, “fair” or “poor” based on the presence/severity of beech bark disease, severity of bark deterioration and limb loss, and canopy coverage estimated as a percentage based on RPA visual imagery. In August of 2020, thermal imagery was collected on five different days: August 6th, 7th, 15th, 19th, and 26th, and in the following year was collected on three different days: August 2nd, 3rd, and 4th. Canopy temperatures of each individual beech tree was retrieved, normalized based on air temperature (canopy temperature depression) and analyzed to determine whether canopy temperature readings significantly differed based on health level. This study found that increasing American beech tree canopy temperatures were not correlated with deteriorating health. The one-way ANOVA performed for most flights showed that canopy temperature readings did not significantly change based on the recorded tree health level.