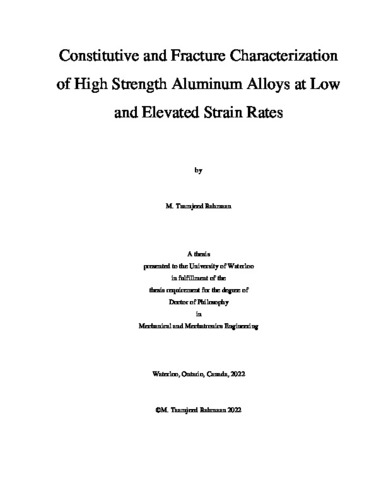 The present research investigates the constitutive and fracture behavior of three high strength automotive aluminum sheet alloys, AA6013-T6, AA7075-T6, and AA7xxx-T6 under quasi-static and elevated strain rate conditions. The constitutive characterization included room temperature uniaxial tensile tests along seven orientations (0°, 15°, 30°, 45°, 60°, 75°, and 90°) with respect to the rolling direction along with shear and through-thickness compression. The three alloys exhibited significant plastic anisotropy in terms of the measured r–values, while relatively low anisotropy of the stress response. As part of this research, a novel methodology was developed to experimentally characterize the isotropic hardening response to large strains using tensile and shear specimens. Elevated strain rate tensile and shear tests were performed at strain rates spanning 0.001 to 500 s-1 with mild positive rate sensitivity observed in each material. The influence of strain rate on the in-plane plastic anisotropy, in terms of the flow stress ratios and r–values, was low. High speed infrared imaging was used to measure temperature rise of up to 40 ºC during the elevated rate tests to aid in the modelling of thermal softening on fracture. A phenomenological strain rate and temperature dependent Hockett–Sherby (HS-SRT) constitutive model was developed and shown to accurately capture the hardening behavior. The evaluation of multiple yield functions was performed to select an appropriate one. The Barlat YLD2004 yield function with an associated flow rule was calibrated and accurately captured the anisotropic plasticity response for the range of loading conditions. Quasi-static fracture characterization tests were performed under stress states ranging from shear to equal-biaxial tension for the three alloys. It was observed that all three alloys exhibited appreciable dependency on the stress state, while the ductility found to be lowest in the plane strain stress state. The AA6013-T6 alloy displayed the greater ductility among all three alloys tested, while ductility was lowest for AA7075-T6. A generalized Drucker-Prager (GDP) stress state dependent fracture model is proposed that overcomes limitations associated with the Hosford-Coulomb (HC) fracture model (the GDP model admits different fracture limits in uniaxial versus biaxial tension whereas the HC model does not). The calibrated fracture loci using the generalized Drucker-Prager (GDP) fracture function exhibited good agreement with the experimental data. The force–displacement and absorbed energy of a structural hat channel section in a three-point bend test was accurately predicted in the simulations conducted using the experimentally-derived fracture loci regularized with the biaxial dome test. The effect of strain rate on the fracture strain was characterized for one of the alloys, AA7075-T6, using micro-shear, hole tension, notch tension, and groove tension specimens, at strain rates ranging from 0.01 to 500 s-1. The effect of strain rate on fracture was mild. The ductility for the shear, hole tension, and notch specimens decreased by 5% between strain rates of 0.01 and 10 s-1, but recovered by 4% for shear specimens and 3% for hole tension and notch tension specimens. A minimal strain rate effect on the fracture strain was observed for the groove tension specimen. Since hole tension, notch tension, and groove tension specimens exhibited through-thickness necking prior to fracture, the fracture strains at the mid-plane of the samples were obtained using hybrid experimental–numerical finite element (FE) modelling. The GDP fracture model was modified to incorporate strain rate sensitivity and was calibrated to the high strain rate fracture tests. FE simulations incorporating the proposed strain rate dependent generalized Drucker-Prager (GDP) fracture model accurately captured the experimental data over the studied range of strain, strain rates, and stress states for the AA7075-T6 sheet alloy.