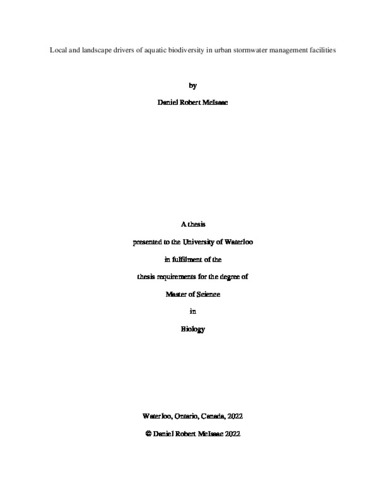 Stormwater management facilities (SWMFs) are often constructed in urban areas to provide flood mitigation and runoff control, and thus replace some wetland functions. Yet, their suitability as habitat for wetland biota is contested. My research objective was to identify the important local- and landscape-level factors most likely influencing habitat suitability of SWMFs in Brampton, Ontario for two widely-used wetland bioindicators: fish and anurans. I discovered that fish were prevalent (60% of sites), though richness was low (average 1 species per site, 6 species total). Low richness likely reflected poor habitat and/or water quality (shrubs and chloride ions), as well as habitat isolation (i.e., ponds do not directly link to streams). Fish communities were composed of native warm-water tolerant, benthivorous species (e.g., fathead minnows), but 20% of sites also included relatively abundant omnivorous, invasive goldfish. Anurans were also prevalent (95% of sites) in SWMFs, with low richness (average 1.5 species per site, 6 species total). Both anuran composition and species richness were related to the extent of robust emergent vegetation (e.g., cattail). When I compared the anuran community composition and species richness in SWMFs to natural wetlands in the surrounding area, I discovered surprising similarity. Differences included that SWMFs support lower diversity overall, with natural wetlands supporting spring peepers and wood frogs that were absent from SWMFs, and SWMFs supporting American bullfrogs that were not detected in natural wetlands. I conclude that SWMFs do provide important ecological habitat to aquatic biota in urban areas and that promoting robust emergent vegetation and improving water quality in SWMFs could increase their habitat value. I contend that SWMFs and not suitable compensation or replacement for natural wetlands, but they should be considered novel ecosystems and incorporated into regional planning for the conservation of urban biodiversity.