From the Standpoint of The Reasonable Person: Epistemic Ignorance, Culpable Dispositions, and the Objective Standard 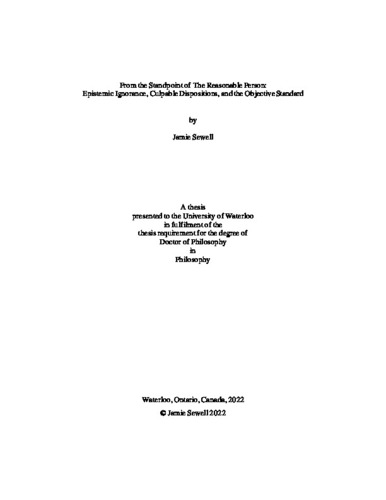 The concept of reasonableness is both vital to the law and frustratingly vague. Efforts to articulate the concept often rely on “common sense” community-based notions of what counts as reasonable. While using common sense to determine reasonableness seems like a logical way to calibrate legal standards - most obviously because legal codes are meant to represent the values of the community served by them – doing so uncritically threatens the just application of the law. This is especially true where “common sense” represents the interests and perspectives of dominant groups, creating additional barriers to justice for marginalized litigants. Because of its widespread use, and its connection to important legal concepts like justice, rationality, deliberation, and fairness, we ought to wrestle reasonableness, as best we can, from the hardened grip of “common sense”. To control for problematic applications of reasonableness standards, some feminist and critical legal scholars have suggested applying subjective standards of reasonableness – calibrating what is reasonable against the capacities and knowledge of the litigants – to make the law appropriately sensitive to a wider array of reasonable behaviour. Others, like Mayo Moran in her 2003 book Rethinking the Reasonable Person: An Egalitarian Construction of the Objective Standard, have instead suggested that we maintain objective standards of reasonableness while identifying a different normative ground of reasonableness. Instead of appealing to common sense to determine what is reasonable, Moran suggests we appeal to the consideration one gives the important interests of others. In negligence law, where Moran’s work is focused, this makes unreasonably risky behaviour that which shows indifference to the important interests of others and deems reasonable behaviour as that which considers and responds to the important interests of others. Despite its value, an important limitation of her project is the difficulty in identifying when actions are borne of indifference to others’ interests. In this dissertation I argue that adding tools in epistemologies of ignorance helps address this limitation by offering ways of thinking about the underlying dispositions toward the important interests of others which can help identify contexts in which indifference to the interests of others is likely. Aside from being a good conceptual fit with existing legal mechanisms like inadvertence and offering clarity to the concept of reasonableness in general, adding considerations of ignorance allows us to ask different kinds of questions about what is reasonable and why, and allows us to connect moral responsibility to ignorance in more robust ways than we currently can.

Jamie Sewell (2022). From the Standpoint of The Reasonable Person: Epistemic Ignorance, Culpable Dispositions, and the Objective Standard. UWSpace. http://hdl.handle.net/10012/18276