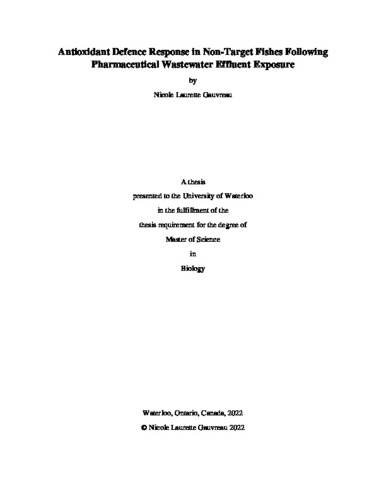 The Grand River watershed extends throughout the majority of Southern Ontario with its final outlet at Lake Erie and accommodates thirty wastewater treatment plants (WWTP) with varying types and degrees of treatment. Many WWTPs are currently unable to effectively eliminate several contaminants of concern (CECs) from their final effluent, leading to measurable concentrations in surface waters and ultimately chronically exposing aquatic species to mixtures of CECs. Exposures to CECs have reported impacts on oxidative stress, measurable through reactive oxygen species (ROS) and the antioxidant defense response which helps reduce the toxicity of ROS generated molecules. This thesis aims to investigate the effects of WWTP effluent on four Etheostoma (Darter) species endemic to the Grand River. Objectives were to examine if increased antioxidative response markers are present in the brains of darters downstream from the effluent outfall compared to clean reference site upstream relative to the Waterloo, ON WWTP between two separate years (Fall 2020 and Fall 2021). This was assessed using transcriptional analysis and enzymatic analysis of antioxidant enzymes (SOD, GPX, CAT) and an enzyme involved in serotonin synthesis (TPH). In fall 2020, significant differences in transcript expression of markers were found among sites and sexes in greenside darters (GSD) with SOD and CAT showing increased expression downstream. Changes in transcript expression aligned with antioxidative enzyme activity where interactive effects with sex-related differences were observed in fish collected the Fall of 2020. In contrast, transcription markers measured in Fall 2021 were increased upstream compared to species below the effluent outfall. Field research is essential to understand subtle effects of wastewater effluent on non-target species, meaning a species that is not intentionally targeted by CECs. Using in vitro studies to supplement in vivo studies provide a better understanding in the mechanisms for any observed phenotypic response. Therefore, this thesis also aimed to investigate the mechanism in alterations in antioxidant response by exposing isolated brain primary cell culture collected from zebrafish and darters to environmentally relevant concentrations of venlafaxine. Antioxidant response of the cells was assessed through cell viability, and antioxidant enzyme activity. Antioxidant enzyme activity of SOD and CAT were both increased in zebrafish, RBD, and GSD isolated brain cultures exposed to 0.01-1 ug/L of venlafaxine. This response supplements the observed changes in antioxidant response of darters in the Grand River as they are chronically exposed to contaminated effluent containing notably high concentrations of pharmaceuticals. Overall, this thesis demonstrates how yearly varying abiotic factors such as observed temperature increases in Fall 2021, species-specific differences, sex-differences, and venlafaxine have roles in increased antioxidant response observed in non-target species. Continued investigation on the impacts of pharmaceutical exposures in non-target organisms is crucial to further the knowledge of WWTP effluent impacts.