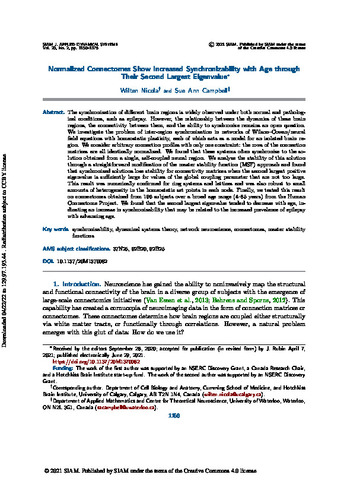 The synchronization of different brain regions is widely observed under both normal and pathological conditions, such as epilepsy. However, the relationship between the dynamics of these brain regions, the connectivity between them, and the ability to synchronize remains an open question. We investigate the problem of inter-region synchronization in networks of Wilson--Cowan/neural field equations with homeostatic plasticity, each of which acts as a model for an isolated brain region. We consider arbitrary connection profiles with only one constraint: the rows of the connection matrices are all identically normalized. We found that these systems often synchronize to the solution obtained from a single, self-coupled neural region. We analyze the stability of this solution through a straightforward modification of the master stability function (MSF) approach and found that synchronized solutions lose stability for connectivity matrices when the second largest positive eigenvalue is sufficiently large for values of the global coupling parameter that are not too large. This result was numerically confirmed for ring systems and lattices and was also robust to small amounts of heterogeneity in the homeostatic set points in each node. Finally, we tested this result on connectomes obtained from 196 subjects over a broad age range (4--85 years) from the Human Connectome Project. We found that the second largest eigenvalue tended to decrease with age, indicating an increase in synchronizability that may be related to the increased prevalence of epilepsy with advancing age.