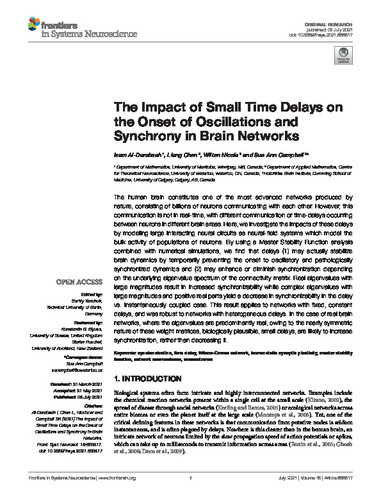 The Impact of Small Time Delays on the Onset of Oscillations and Synchrony in Brain Networks.pdf (2.040Mb)

The human brain constitutes one of the most advanced networks produced by nature, consisting of billions of neurons communicating with each other. However, this communication is not in real-time, with different communication or time-delays occurring between neurons in different brain areas. Here, we investigate the impacts of these delays by modeling large interacting neural circuits as neural-field systems which model the bulk activity of populations of neurons. By using a Master Stability Function analysis combined with numerical simulations, we find that delays (1) may actually stabilize brain dynamics by temporarily preventing the onset to oscillatory and pathologically synchronized dynamics and (2) may enhance or diminish synchronization depending on the underlying eigenvalue spectrum of the connectivity matrix. Real eigenvalues with large magnitudes result in increased synchronizability while complex eigenvalues with large magnitudes and positive real parts yield a decrease in synchronizability in the delay vs. instantaneously coupled case. This result applies to networks with fixed, constant delays, and was robust to networks with heterogeneous delays. In the case of real brain networks, where the eigenvalues are predominantly real, owing to the nearly symmetric nature of these weight matrices, biologically plausible, small delays, are likely to increase synchronization, rather than decreasing it.