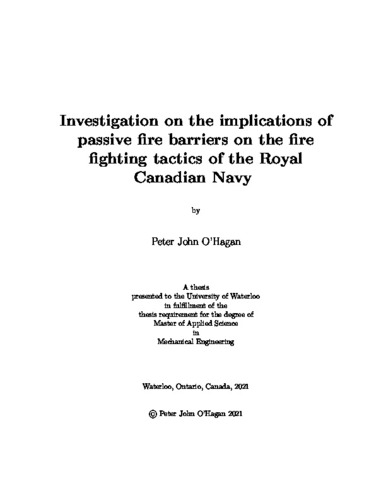 The Royal Canadian Navy (RCN) is currently in the process of recapitalizing the fleet under the National Shipbuilding Strategy (NSS). This will result in a modern fleet that includes new marine safety requirements that did not exist at the time when the current warships were built and will be the first major vessels operated by the RCN that include passive fire barriers fitted at watertight divisions. In case of a fire, these barriers are intended to control the spread of fire between the steel compartments by preventing the conduction of heat through the steel structure into adjacent compartments, and use a non-combustible mineral insulation that is tested and certified under the International Maritime Organization (IMO) rules. Because this is a new design requirement, fire fighting tactics and decision-making processes are based on the existing context where the watertight division is an uninsulated steel structure. In this context, the temperature on the side unexposed to fire is a good indicator of conditions on the side that is exposed to fire. Surface temperatures and any visual cues on the painted steel surfaces (such as off gassing, blistering or burning paint) are useful in determining if safe entry through a door or hatch is possible, and what tactics should be used. If the unexposed side is cool, then it can reasonably be assumed that there is no fire in the immediate vicinity of the opening. With the inclusion of fire insulation in the new vessels, these assumptions are no longer valid, as the mineral wool insulation is specifically intended to prevent the transfer of heat to the unexposed side. Since the unexposed surface is cool, personnel responding to the fire using existing tactics and training tend to be more aggressive and may not follow the normal entry procedures. The demonstration of full-scale results from live fire testing including video, temperature data, and infrared images will be invaluable in explaining the impact to RCN personnel. In turn, this will allow personnel to modify their approach to include suitable caution in the new circumstance. The RCN currently uses a two-tiered response, which consists of an initial response by the Rapid Response Team (RRT), and a second response by a fully equipped Attack Team (AT). The Rapid Response Team uses visual cues and the sense of touch, and the Attack Team uses both visual cues and the infrared readout on a thermal imaging camera (TIC). Although the certification testing demonstrates that the fire insulation will prevent the unexposed side from exceeding a threshold temperature within a specified time rating, it does not provide the full temperature data during the certification testing, which will have an impact on current tactics. The thesis includes a description of the experimental design, instrumentation, a continuous data capture setup, and construction details for the custom steel test wall that includes features such as pipe penetration and a simulated door to replicate a typical watertight division that you would find on a ship. Key results for each of the 10 large-scale tests from the simulated marine compartment fires demonstrate the unexposed surface temperatures for both uninsulated and insulated cases, giving insight into how the insulation changes the context, and how feasible different structural features may be to use as 'tell-tales' when assessing how to safely conduct the compartment entry. How paint responds to fire is a key piece of information for the fire fighting tactics. Small scale testing methods were developed to evaluate how the fire insulation interacts with a painted structure and predict how the surface temperatures relates to various visual cues (such as when the paint on the unexposed side begins to smoke, blister and eventually burn). Understanding paint responses in this environment will help improve current training, help naval architects understand how to safely scale up insulated and painted structures, and provide input for improving marine compartment fire modeling. The inclusion of fire insulation to create passive thermal barriers on ships represents a significant safety improvement, and its efficacy has been demonstrated in both certification testing and in shipboard fires. The results from this thesis provides data that shows real temperatures on the unexposed side during both the Rapid Response Team and the Attack Team time frames will be used to improve the current training, and adjust existing fire fighting tactics and decision making process in the RCN. Additionally, fire insulation is installed on merchant vessels, and thus these results will therefore be of interest to land-based fire fighters responding to marine fires.

Peter John O'Hagan (2022). Investigation on the implications of passive fire barriers on the fire fighting tactics of the Royal Canadian Navy. UWSpace. http://hdl.handle.net/10012/18122