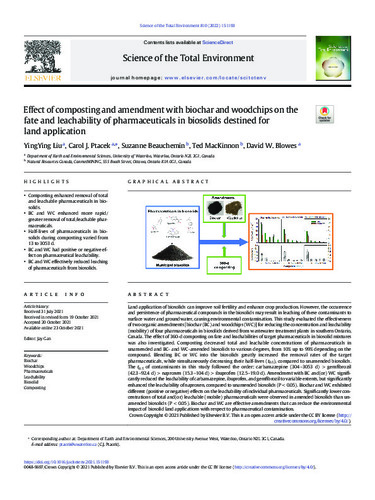 Effect of composting and amendment with biochar and woodchips on the fate and leachability of pharmaceuticals in biosolids destined for land application.pdf (1.032Mb)

Land application of biosolids can improve soil fertility and enhance crop production. However, the occurrence and persistence of pharmaceutical compounds in the biosolids may result in leaching of these contaminants to surface water and groundwater, causing environmental contamination. This study evaluated the effectiveness of two organic amendments [biochar (BC) and woodchips (WC)] for reducing the concentration and leachability (mobility) of four pharmaceuticals in biosolids derived from wastewater treatment plants in southern Ontario, Canada. The effect of 360-d composting on fate and leachabilities of target pharmaceuticals in biosolid mixtures was also investigated. Composting decreased total and leachable concentrations of pharmaceuticals in unamended and BC- and WC-amended biosolids to various degrees, from 10% up to 99% depending on the compound. Blending BC or WC into the biosolids greatly increased the removal rates of the target pharmaceuticals, while simultaneously decreasing their half-lives (t0.5), compared to unamended biosolids. The t0.5 of contaminants in this study followed the order: carbamazepine (304–3053 d) > gemfibrozil (42.3–92.4 d) > naproxen (15.3–104 d) > ibuprofen (12.5–19.0 d). Amendment with BC and(or) WC significantly reduced the leachability of carbamazepine, ibuprofen, and gemfibrozil to variable extents, but significantly enhanced the leachability of naproxen, compared to unamended biosolids (P < 0.05). Biochar and WC exhibited different (positive or negative) effects on the leachability of individual pharmaceuticals. Significantly lower concentrations of total and(or) leachable (mobile) pharmaceuticals were observed in amended biosolids than unamended biosolids (P < 0.05). Biochar and WC are effective amendments that can reduce the environmental impact of biosolid land applications with respect to pharmaceutical contamination.