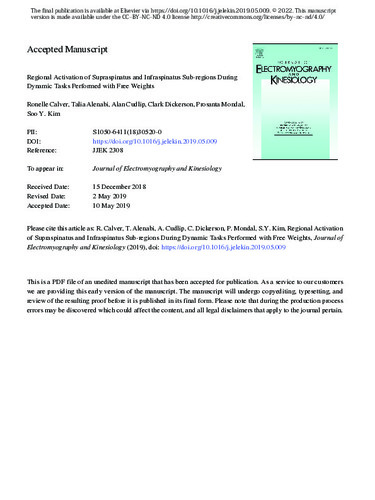 Growing evidence supports the existence of distinct anatomical sub-regions within supraspinatus and infraspinatus, but only recently has attention turned to exploring their potential functional differences. Using indwelling fine-wire electromyography, muscle activity was investigated from these sub-regions in 15 participants (mean 34 yr, 170 cm, 71.9 kg) during dynamic external rotation (ER), abduction, flexion, and scaption tasks with and without free weights corresponding to 50% and 75% of the participant’s five repetition maximum. Electromyography data were normalized to isometric and isokinetic maximal voluntary contractions and activation ratios for each sub-region compared. Differences in mean regional activation ratios for supraspinatus and infraspinatus varied by arm posture, but were not influenced by load. Relative activation of posterior supraspinatus was greater during an ER task performed in side lying compared to an ER task performed with 90° of humeral elevation in seated and prone postures. Relative activation of superior infraspinatus was greater during an ER task in prone and side lying postures compared to flexion and scaption. Similar results were found when comparing regional muscle activation ratios for infraspinatus between tasks regardless of normalization method employed. These findings may impact exercise selection in the non-operative management of rotator cuff tears.