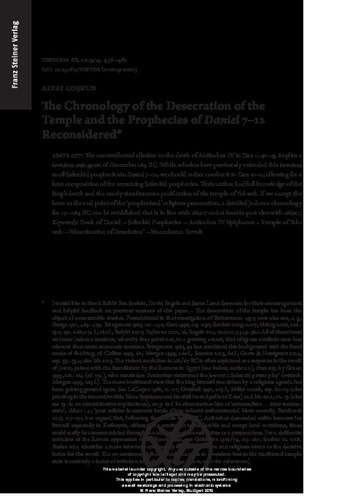 Generations of scholars have been puzzled by the chronological time frame that the Seleukid prophecies of Daniel 7–12 are structured around. Basic to the problem is Dan 11.40–45, which clearly implies that the author did not know when and how Antiochos IV died. This seemed to warrant the terminus ante quem of late 164 BC, with the result that the prophet had not yet seen the effective turn in the Maccabaean revolt against the king, let alone the purification of the Jerusalem temple on 25 Kislev 148 SE (ca. 14 Dec. 164 BC). The present study suggests relating this terminus only to Dan 10–11, while allowing for a later composition of the remaining Seleukid prophecies. Based on a chronological revision of the First and Second Book of Maccabees, a plausible timeline can be presented that is compatible with every historical implication of Dan 7–9 and 12. Accordingly, the apocalyptic final year week started with the replacement of Jason as high priest by his rival Menelaos in 171/70 BC; the temple was pillaged by Antiochos IV in summer 169 BC, and Seleukid forces expelled Jason from Jerusalem in 168 BC. The cataclysmic final three-and-a-half years started with the arrival of the commander Apollonios in Jerusalem in May or June 167 BC, followed by the issue of Antiochos’ religious edict around October 167 BC. The pinnacle of the religious persecution was reached with the sacrifice to Zeus Olympios in the temple of Yahweh on 25 Kislev 145 SEB (December 167 BC). Nearly all prophecies regard the purification of the temple as the end point of the crisis. Only the addendum Dan 12.12 alludes to an event that happened 45 days later, perhaps the completion of the fortifications against the royal garrison and the Judaean collaborators on the Akra of Jerusalem. Dan 7–9 and 12 were likely composed by the end of January 163 BC, to supersede Dan 10–11, which had become obsolete after the king’s death. The two groups of Seleukid prophecies were later merged when the collective memory of the events was fading away (before 100 BC).