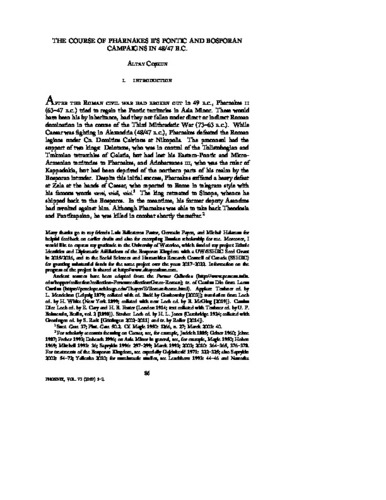 Appian’s account of Pharnakes’ Pontic campaign (Mithr. 120.590–595) conveys the impression that the king of the Bosporos started his attack on Asia Minor by attacking Sinope from the sea. The end of the narrative, however, raises some doubts as to whether the king had a fleet at his disposition. It is therefore a plausible hypothesis that Pharnakes’ land forces had marched through Kolchis to invade Asia Minor. The Bellum Alexandrinum (34–78) and Cassius Dio (42.45–47) confirm this view and allow us to complete the picture. Seeming contradictions disappear, once we concede that Armenia (Minor) denoted the entire former Mithradatic territory in Anatolia east of the river Halys, or at least east of the river Iris. Pharnakes progressed along the south-eastern coast of the Black Sea, much of which was then ruled by the Galatian King Deiotaros, before turning south at the mouth of the Iris. This way, he reached northern Kappadokia, but withdrew to Pontic Armenia after the diplomatic intervention of the proconsul Cn. Domitius Calvinus. When negotiations failed, Pharnakes defeated the Romans and their Galatian and Kappadokian allies at Nikopolis, whence he expanded further west into Paphlagonian Pontos. News of Asandros’ revolt in the Bosporos caused his army to march back east, but the unexpected arrival of Caesar induced him to turn back once more. In the meantime, he ordered allied forces to gather on the Taman peninsula, while Asandros was extending his control over the European parts of the kingdom. Beaten by Caesar at Zela, Pharnakes fled to Sinope, and was so desperate to escape Calvinus that he killed the last 1,000 horses, to evacuate their riders by sea on randomly confiscated ships. Together with his allies, he was able to retake Theodosia and Pantikapaion, but was defeated regardless by Asandros no later than early September 47 BC. Appian’s account thus emerges as largely reliable regarding facts, whereas distortions are due to his arbitrary selection of details and skewed causalities. These are best explained with the literary design of his narrative and its underlying moral lesson.