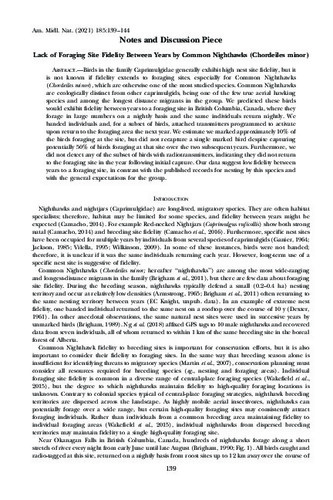 Birds in the family Caprimulgidae generally exhibit high nest site fidelity, but it is not known if fidelity extends to foraging sites, especially for Common Nighthawks (Chordeiles minor), which are otherwise one of the most studied species. Common Nighthawks are ecologically distinct from other caprimulgids, being one of the few true aerial hawking species and among the longest distance migrants in the group. We predicted these birds would exhibit fidelity between years to a foraging site in British Columbia, Canada, where they forage in large numbers on a nightly basis and the same individuals return nightly. We banded individuals and, for a subset of birds, attached transmitters programmed to activate upon return to the foraging area the next year. We estimate we marked approximately 10% of the birds foraging at the site, but did not recapture a single marked bird despite capturing potentially 50% of birds foraging at that site over the two subsequent years. Furthermore, we did not detect any of the subset of birds with radiotransmitters, indicating they did not return to the foraging site in the year following initial capture. Our data suggest low fidelity between years to a foraging site, in contrast with the published records for nesting by this species and with the general expectations for the group.