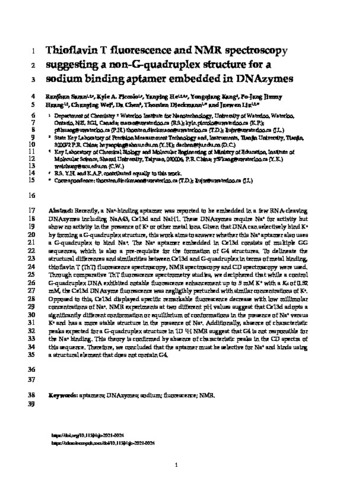 Recently, a Na+-binding aptamer was reported to be embedded in a few RNA-cleaving DNAzymes including NaA43, Ce13d and NaH1. These DNAzymes require Na+ for activity but show no activity in the presence of K+ or other metal ions. Given that DNA can selectively bind K+ by forming a G-quadruplex structure, this work aims to answer whether this Na+ aptamer also uses a G-quadruplex to bind Na+. The Na+ aptamer embedded in Ce13d consists of multiple GG sequences, which is also a pre-requisite for the formation of G4 structures. To delineate the structural differences and similarities between Ce13d and G-quadruplex in terms of metal binding, thioflavin T (ThT) fluorescence spectroscopy, NMR spectroscopy and CD spectroscopy were used. Through comparative ThT fluorescence spectrometry studies, we deciphered that while a control G-quadruplex DNA exhibited notable fluorescence enhancement up to 5 mM K+ with a Kd of 0.52 mM, the Ce13d DNAzyme fluorescence was negligibly perturbed with similar concentrations of K+. Opposed to this, Ce13d displayed specific remarkable fluorescence decrease with low millimolar concentrations of Na+. NMR experiments at two different pH values suggest that Ce13d adopts a significantly different conformation or equilibrium of conformations in the presence of Na+ versus K+ and has a more stable structure in the presence of Na+. Additionally, absence of characteristic peaks expected for a G-quadruplex structure in 1D 1H NMR suggest that G4 is not responsible for the Na+ binding. This theory is confirmed by absence of characteristic peaks in the CD spectra of this sequence. Therefore, we concluded that the aptamer must be selective for Na+ and binds using a structural element that does not contain G4.