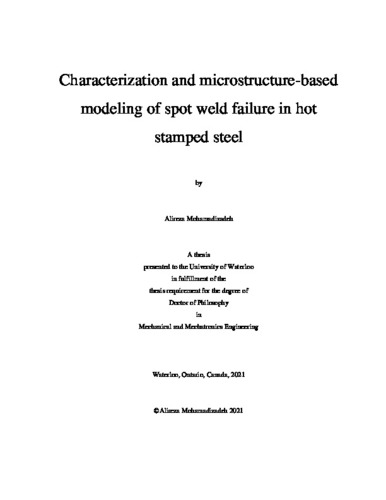 The performance of automotive safety components in a crash event depends on the mechanical properties of the sheet metal as well as the failure behavior of the spot welds that are used for sheet metal assembly. Unlike many practical and numerical methods for quantitative and qualitative failure characterization of uniform sheet metals, spot weld failure analysis methods are complicated by the complex microstructure, non-uniform properties and loading conditions around the weld and the fact that spot weld area is not accessible during failure. Therefore, current spot weld failure analysis is typically limited to post-failure observations and peak load measurement. Without having a proper way to characterize the spot weld failure, simple load-based failure criteria were used to predict the onset of failure. In these models the effect of microstructure, through-thickness damage progression, failure mode, the location of failure, post-failure energy absorption, and fracture paths are not considered. In the present work, spot weld failure for several automotive-grade press-hardening steels, Usibor®1500-AS, Ductibor®1000-AS, and Ductibor®500-AS, is investigated considering the effect of microstructure on failure and a hardness-mapping approach to implement local material properties into meso-scale models. To this end, resistance spot weld process optimization was performed using a combination of experiment and process simulation for five different material conditions including the three aforementioned hot-stamped alloys, as well as two tailored hot stamped conditions using lower quench rates for Usibor®1500-AS. Using the optimized welding settings, a transient softened zone at the fusion boundary, the halo ring, was formed in the as-hot-stamped Usibor®1500-AS spot welds. Optical and electron microscopy showed that, the halo ring is a ~100 μm wide band with a minimum hardness of 472 HV around the weld nugget which leads to partial thickness failure and pull-out through a shear-assisted fracture along the band. A novel in-situ¬ failure characterization test method using modified double half-weld (DHW) specimens coupled with Digital Image Correlation (DIC) was developed to capture the failure event on the cross-section of the welds under shear and normal loading. To demonstrate the capability of the new in-situ testing technique for different failure modes, modified RSW parameters were used to eliminate the halo ring in hot-stamped Usibor®1500-AS spot weld and to promote interfacial failure in the hot-stamped Ductibor®1000-AS spot weld. The DIC results revealed that failure is initiated at the weld notch by Corona debonding regardless of spot weld microstructure and loading condition. In the presence of the halo ring, failure occurs by strain localization and shear band formation at the halo ring. In the absence of the halo ring, fracture occurs parallel to the load under normal loading and within the softened HAZ under shear load. Using the DHW+DIC technique, interfacial failure in the as-hot-stamped Ductibor®1000-AS spot weld was found to be a ductile shear-dominant event rather than brittle fracture, as is commonly asserted for interfacial failure in the literature. A hardness/microstructure mapping approach was used to assign local material properties to a discretized spot weld geometry model which was created with a 3D meshing strategy with nominal element size of 60 μm. The constitutive models and fracture surfaces for the HAZ were calibrated based on tensile and plane-strain V-bend test results and implemented in finite element models of lap-shear and cross-tension tests. The models were able to predict partial and complete pull-out as well as interfacial failure responses, depending upon the alloy and welding process conditions. The predicted failure modes and mechanisms, location of failure, and through-thickness damage progression matched the experimental observations and the predicted failure loads were within 6.3% of measured values. From the current research, comprising detailed microstructure characterization, development of the novel in-situ failure analysis techniques, and meso-scale through-thickness modeling, a fundamental understanding of spot weld failure mechanisms and damage progression has been established, which was the key outcome of this research.