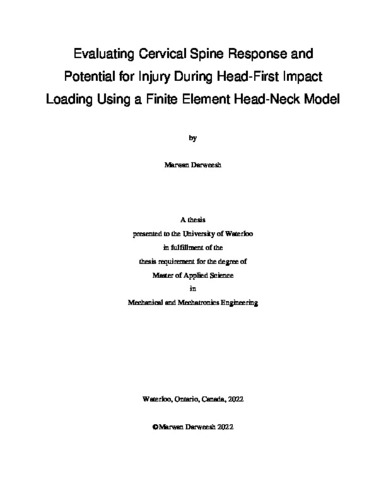 Head-first impact (HFI) is caused by events such as rollover motor-vehicle accidents, falls, and sports, and can impose serious and detrimental hard and soft tissue injuries on the cervical spine. HFI is a loading condition which involves direct impact to the head resulting from the person (usually in an inverted position) approaching and subsequently impacting a surface. During HFI loading, the momentum of the following torso coupled with the relatively stationary head impacting a surface act together to compress the cervical spine. Due to the severity of the incurred injuries in addition to the complex kinematics of the cervical spine during HFI, several numerical and experimental studies have been conducted in order to characterize and investigate the response and injury outcome of the cervical spine during HFI loading. However, these experimental and numerical studies have several limitations pertaining to quantitatively analyzing the kinematic response of the cervical spine, studying soft tissue injury risk, and conducting sensitivity studies that identify factors which influence cervical spine response during HFI. Therefore, this study aimed to address these experimental and numerical limitations by achieving two objectives: (1) validating a biofidelic and detailed finite element head-neck model against two sets of experimental data, and (2) conducting a sensitivity study to identify important factors that influence the kinematic, kinetic, and injury response of the cervical spine during HFI. The kinematic results were the buckling behaviour of the cervical spine (quantified by a variable termed the buckling parameter) and the kinetic results were the head contact force and axial neck compressive force histories. The hard tissue injury results entailed the onset time and location of vertebral fracture and the soft tissue injury results entailed identifying ligament rupture and disc avulsion. HFI parameters (e.g., initial conditions such as cervical spine curvature prior to impact) were identified from literature and varied in a sensitivity study to evaluate the individual effect on cervical spine response relative to a reference baseline model. All model configurations (the two validation models and the sensitivity study models) were simulated in HFI and quantitatively assessed using kinematic response, kinetic response, hard tissue injury, and soft tissue injury. The validation results indicated that there was good agreement for the axial neck compressive force (less than 500 N difference). Good agreement was not predicted for the head contact force (more than 3,500 N difference) because of the different deformation levels observed at the model and experimental impact interfaces. Good agreement was predicted for the cervical spine kinematic response (less than 7% difference in buckling parameter) because of the same buckling mode and inflection point between the model and the experiments. Moreover, good agreement was observed for the hard and soft tissue injury outcomes in terms of onset time (less than 1 ms difference) and location of injury occurrence (e.g., C3 and C4 laminar and spinous process fractures as well as anterior longitudinal ligament ruptures). The sensitivity study results indicated that the impact velocity of the head and neck prior to impact had the greatest influence on the response of the cervical spine during HFI, followed by the lateral angle of the impact plate and the anteroposterior angle of the head. Quantitatively analyzing the kinematic response of the cervical spine provided guidance and information for investigating the kinetic response and the injury risk. It is recommended that future numerical research investigating HFI focus on the effects of incorporating active and passive musculature on the response of the cervical spine, and to develop a hard tissue failure model suitable for predicting and modelling vertebrae fracture initiation and propagation. Furthermore, it is recommended for future experimental research to consider the effect of freeing the boundary condition applied at the first thoracic vertebra on the resultant response and to consider the lateral angle of the impact plate as an important factor in the behaviour of the cervical spine under HFI.