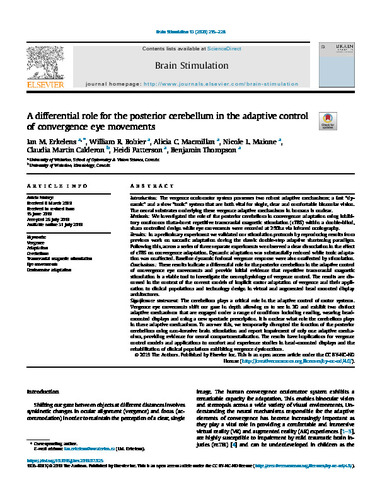 A differential role for the posterior cerebellum in the adaptive control of convergence eye movements.pdf (2.419Mb)

Introduction The vergence oculomotor system possesses two robust adaptive mechanisms; a fast “dynamic” and a slow “tonic” system that are both vital for single, clear and comfortable binocular vision. The neural substrates underlying these vergence adaptive mechanisms in humans is unclear. Methods We investigated the role of the posterior cerebellum in convergence adaptation using inhibitory continuous theta-burst repetitive transcranial magnetic stimulation (cTBS) within a double-blind, sham controlled design while eye movements were recorded at 250hz via infrared oculography. Results In a preliminary experiment we validated our stimulation protocols by reproducing results from previous work on saccadic adaptation during the classic double-step adaptive shortening paradigm. Following this, across a series of three separate experiments we observed a clear dissociation in the effect of cTBS on convergence adaptation. Dynamic adaptation was substantially reduced while tonic adaptation was unaffected. Baseline dynamic fusional vergence response were also unaffected by stimulation. Conclusions These results indicate a differential role for the posterior cerebellum in the adaptive control of convergence eye movements and provide initial evidence that repetitive transcranial magnetic stimulation is a viable tool to investigate the neurophysiology of vergence control. The results are discussed in the context of the current models of implicit motor adaptation of vergence and their application to clinical populations and technology design in virtual and augmented head mounted display architectures. Significance statement The cerebellum plays a critical role in the adaptive control of motor systems. Vergence eye movements shift our gaze in depth allowing us to see in 3D and exhibit two distinct adaptive mechanisms that are engaged under a range of conditions including reading, wearing head-mounted displays and using a new spectacle prescription. It is unclear what role the cerebellum plays in these adaptive mechanisms. To answer this, we temporarily disrupted the function of the posterior cerebellum using non-invasive brain stimulation and report impairment of only one adaptive mechanism, providing evidence for neural compartmentalization. The results have implications for vergence control models and applications to comfort and experience studies in head-mounted displays and the rehabilitation of clinical populations exhibiting vergence dysfunctions.