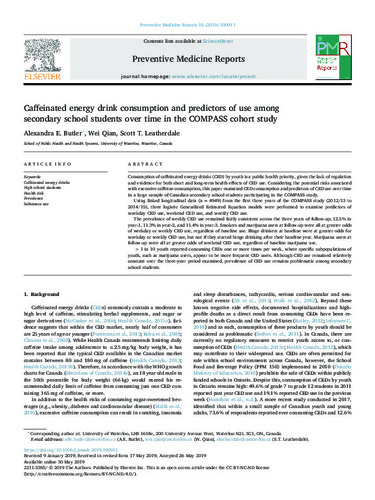 Caffeinated energy drink consumption and predictors of use among secondary school students over time in the COMPASS cohort study.pdf (405.9Kb)

Consumption of caffeinated energy drinks (CED) by youth is a public health priority, given the lack of regulation and evidence for both short and long-term health effects of CED use. Considering the potential risks associated with excessive caffeine consumption, this paper examined CED consumption and predictors of CED use over time in a large sample of Canadian secondary school students participating in the COMPASS study. Using linked longitudinal data (n = 4949) from the first three years of the COMPASS study (2012/13 to 2014/15), three logistic Generalized Estimated Equation models were performed to examine predictors of weekday CED use, weekend CED use, and weekly CED use. The prevalence of weekly CED use remained fairly consistent across the three years of follow-up; 12.5% in year-1, 11.3% in year-2, and 11.4% in year-3. Smokers and marijuana users at follow-up were all at greater odds of weekday or weekly CED use, regardless of baseline use. Binge drinkers at baseline were at greater odds for weekday or weekly CED use, but not if they started binge drinking after their baseline year. Marijuana users at follow-up were all at greater odds of weekend CED use, regardless of baseline marijuana use. >1 in 10 youth reported consuming CEDs one or more times per week, where specific subpopulations of youth, such as marijuana users, appear to be more frequent CED users. Although CED use remained relatively constant over the three-year period examined, prevalence of CED use remains problematic among secondary school students.