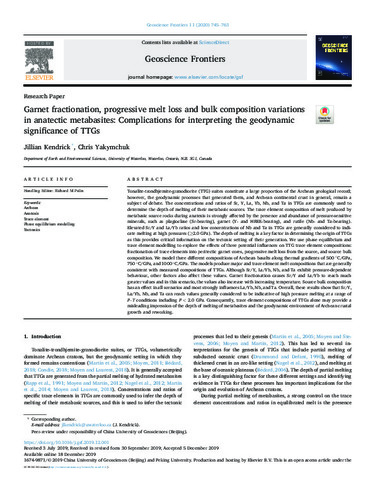 Tonalite-trondhjemite-granodiorite (TTG) suites constitute a large proportion of the Archean geological record; however, the geodynamic processes that generated them, and Archean continental crust in general, remain a subject of debate. The concentrations and ratios of Sr, Y, La, Yb, Nb, and Ta in TTGs are commonly used to determine the depth of melting of their metabasic sources. The trace element composition of melt produced by metabasic source rocks during anatexis is strongly affected by the presence and abundance of pressure-sensitive minerals, such as plagioclase (Sr-bearing), garnet (Y- and HREE-bearing), and rutile (Nb- and Ta-bearing). Elevated Sr/Y and La/Yb ratios and low concentrations of Nb and Ta in TTGs are generally considered to indicate melting at high pressures (≥2.0 ​GPa). The depth of melting is a key factor in determining the origin of TTGs as this provides critical information on the tectonic setting of their generation. We use phase equilibrium and trace element modelling to explore the effects of three potential influences on TTG trace element compositions: fractionation of trace elements into peritectic garnet cores, progressive melt loss from the source, and source bulk composition. We model three different compositions of Archean basalts along thermal gradients of 500 ​°C/GPa, 750 ​°C/GPa, and 1000 ​°C/GPa. The models produce major and trace element melt compositions that are generally consistent with measured compositions of TTGs. Although Sr/Y, La/Yb, Nb, and Ta exhibit pressure-dependent behaviour, other factors also affect these values. Garnet fractionation causes Sr/Y and La/Yb to reach much greater values and in this scenario, the values also increase with increasing temperature. Source bulk composition has an effect in all scenarios and most strongly influences La/Yb, Nb, and Ta. Overall, these results show that Sr/Y, La/Yb, Nb, and Ta can reach values generally considered to be indicative of high pressure melting at a range of P–T conditions including P ​< ​2.0 ​GPa. Consequently, trace element compositions of TTGs alone may provide a misleading impression of the depth of melting of metabasites and the geodynamic environment of Archean crustal growth and reworking.