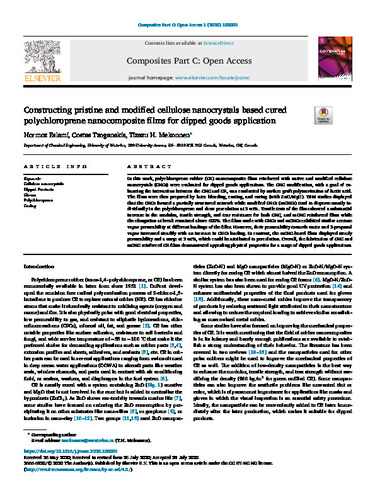 In this work, polychloroprene rubber (CR) nanocomposite films reinforced with native and modified cellulose nanocrystals (CNCs) were evaluated for dipped goods applications. The CNC modification, with a goal of enhancing the interaction between the CNC and CR, was conducted by surface graft polymerization of lactic acid. The films were then prepared by latex blending, casting, and curing (with ZnO/MgO). TEM studies displayed that the CNCs formed a partially structured network while modified CNCs (mCNCs) tend to disperse mostly individually in the polychloroprene and show percolation at 3 wt%. Tensile tests of the films showed a substantial increase in the modulus, tensile strength, and tear resistance for both CNC, and mCNC reinforced films while the elongation at break remained above 600%. The films made with CNCs and mCNCs exhibited similar acetone vapor permeability at different loadings of the filler. However, their permeability towards water and 2-propanol vapor increased steadily with an increase in CNCs loading. In contrast, the mCNC-based films displayed steady permeability and a surge at 3 wt%, which could be attributed to percolation. Overall, the fabrication of CNC and mCNC reinforced CR films demonstrated appealing physical properties for a range of dipped goods applications.