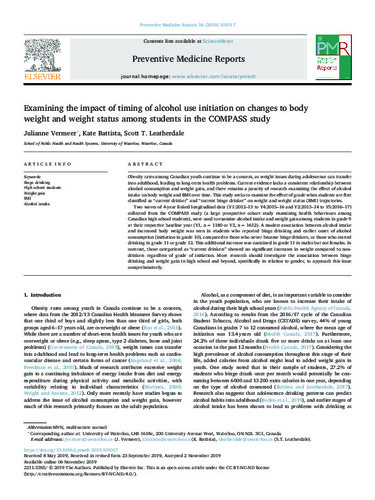 Examining the impact of timing of alcohol use initiation on changes to body weight and weight status among students in the COMPASS study.pdf (848.0Kb)

Obesity rates among Canadian youth continue to be a concern, as weight issues during adolescence can transfer into adulthood, leading to long-term health problems. Current evidence lacks a consistent relationship between alcohol consumption and weight gain, and there remains a paucity of research examining the effect of alcohol intake on body weight and BMI over time. This study seeks to examine the effect of grade when students are first classified as “current drinker” and “current binge drinker” on weight and weight status (BMI) trajectories. Two waves of 4-year linked longitudinal data (Y1:2012–13 to Y4:2015–16 and Y2:2013–14 to Y5:2016–17) collected from the COMPASS study (a large prospective cohort study examining health behaviours among Canadian high school students), were used to examine alcohol intake and weight gain among students in grade 9 at their respective baseline year (Y1, n = 1180 or Y2, n = 1612). A modest association between alcohol intake and increased body weight was seen in students who reported binge drinking and earlier onset of alcohol consumption (initiation in grade 10), compared to those who never became binge drinkers, or those who started drinking in grade 11 or grade 12. This additional increase was sustained in grade 11 in males but not females. In contrast, those categorized as “current drinkers” showed no significant increases in weight compared to non-drinkers regardless of grade of initiation. More research should investigate the association between binge drinking and weight gain in high school and beyond, specifically in relation to gender, to approach this issue comprehensively.

Julianne Vermeer, Kate Battista, Scott T. Leatherdale (2019). Examining the impact of timing of alcohol use initiation on changes to body weight and weight status among students in the COMPASS study. UWSpace. http://hdl.handle.net/10012/18033