Phosphorus retention and transformation in a dammed reservoir of the Thames River, Ontario: Impacts on phosphorus load and speciation 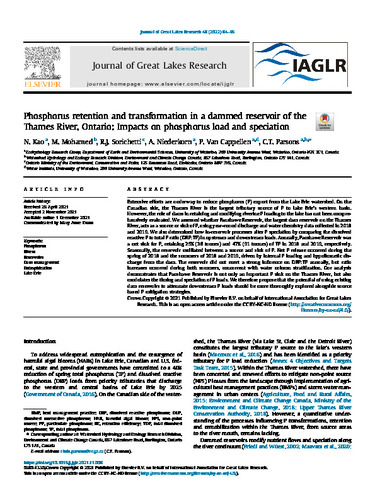 Phosphorus retention and transformation in a dammed reservoir of the Thames River, Ontario- Impacts on phosphorus load and speciation.pdf (2.016Mb)

Extensive efforts are underway to reduce phosphorus (P) export from the Lake Erie watershed. On the Canadian side, the Thames River is the largest tributary source of P to Lake Erie’s western basin. However, the role of dams in retaining and modifying riverine P loading to the lake has not been comprehensively evaluated. We assessed whether Fanshawe Reservoir, the largest dam reservoir on the Thames River, acts as a source or sink of P, using year-round discharge and water chemistry data collected in 2018 and 2019. We also determined how in-reservoir processes alter P speciation by comparing the dissolved reactive P to total P ratio (DRP:TP) in upstream and downstream loads. Annually, Fanshawe Reservoir was a net sink for P, retaining 25% (36 tonnes) and 47% (91 tonnes) of TP in 2018 and 2019, respectively. Seasonally, the reservoir oscillated between a source and sink of P. Net P release occurred during the spring of 2018 and the summers of 2018 and 2019, driven by internal P loading and hypolimnetic discharge from the dam. The reservoir did not exert a strong influence on DRP:TP annually, but ratio increases occurred during both summers, concurrent with water column stratification. Our analysis demonstrates that Fanshawe Reservoir is not only an important P sink on the Thames River, but also modulates the timing and speciation of P loads. We therefore propose that the potential of using existing dam reservoirs to attenuate downstream P loads should be more thoroughly explored alongside source based P mitigation strategies.