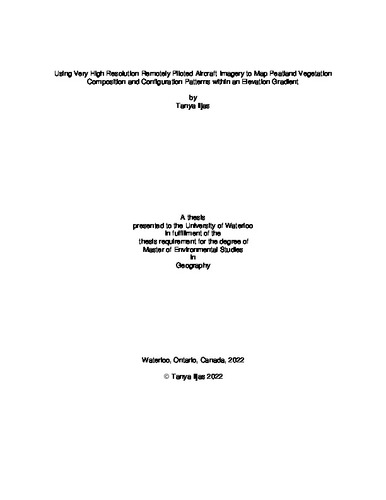 GIS has developed over the decades from theory to highly accurate scientific observation using satellites that provide high resolution imagery. Over the last decade drones have been introduced to the world of GIS and have been able to overcome some of the issues present in satellite and aerial imagery such as lower resolution for smaller objects and temporal constraints. My thesis aims to explore how accurately RPAS can identify vegetation communities classed by morphological structure when compared to ground based vegetation surveys in peatlands in Alberta. The wetland sites are situated across subregions that are currently not mapped by the Alberta Merged Wetland Inventory. Our research aims to answer the following questions: 1) assess at how differing image resolution (2 cm and 3 cm) influence the ability to identify morphologically functional classes within the RPAS imagery. 2) test the accuracy at which different morphological functional trait classes of vegetation could be digitized from remotely sensed imagery, highlight which classes had the highest and lowest accuracy and try to explain why. 3) Investigate if RPAS can be used to map out vegetation composition and configuration to replace ground based surveys. 4) Determine across an elevation gradient within the subregion groups (subalpine, montane and upper foothills) if there are any significant landscape metrics patterns that change across these subregions using elevation as a controlling variable. Flights were conducted with RPAS to collect imagery with a resolution of 2 cm and 3 cm then classified into digitized classes that represent the morphological structure of different vegetation across 18 peatland. 13 different features were classified in the 18 peatlands. All 18 peatland boundaries were delineated using slope, which removed classes such as roads, objects, culverts, and bridges. The delineated peatlands were then run through a landscape metric package in R to determine spatial patterns of vegetation at both landscape and class level. Landscape Metrics revealed composition and configuration characteristics that were significant when plotted against elevation for landscape level metrics. Replication of the results once accuracy has been increased using either higher resolution imagery or other sensors to determine validity of the results is needed.