Magnetoconductance due to variable-range hopping in quasi-two-dimensional systems: Application to PrBa2Cu3O7-delta 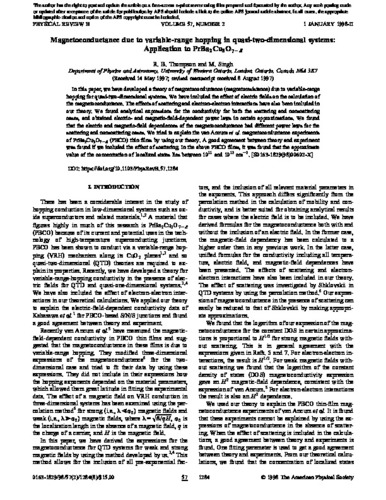 In this paper, we have developed a theory of magnetoconductance (magnetoresistance) due to variable-range hopping for quasi-two-dimensional systems. We have included the effect of electric fields on the calculation of the magnetoconductance. The effects of scattering and electron-electron interactions have also been included in our theory. We found analytical expressions for the conductivity for both the scattering and nonscattering cases, and obtained electric- and magnetic-field-dependent power laws in certain approximations. We found that the electric and magnetic-field dependences of the magnetoconductance had different power laws for the scattering and nonscattering cases. We tried to explain the van Ancum et al. magnetoconductance experiments of PrBa2Cu3O7-delta (PBCO) thin films by using our theory. A good agreement between theory and experiment was found if we included the effect of scattering. In the above PBCO films, it was found that the approximate value of the concentration of localized states lies between 10^11 and 10^12 cm^-2.