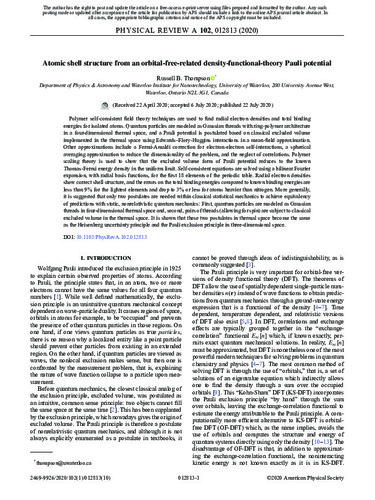 Polymer self-consistent field theory techniques are used to find radial electron densities and total binding energies for isolated atoms. Quantum particles are modeled as Gaussian threads with ring-polymer architecture in a four-dimensional thermal space, and a Pauli potential is postulated based on classical excluded volume implemented in the thermal space using Edwards–Flory-Huggins interactions in a mean-field approximation. Other approximations include a Fermi-Amaldi correction for electron-electron self-interactions, a spherical averaging approximation to reduce the dimensionality of the problem, and the neglect of correlations. Polymer scaling theory is used to show that the excluded volume form of Pauli potential reduces to the known Thomas-Fermi energy density in the uniform limit. Self-consistent equations are solved using a bilinear Fourier expansion, with radial basis functions, for the first 18 elements of the periodic table. Radial electron densities show correct shell structure, and the errors on the total binding energies compared to known binding energies are less than 9% for the lightest elements and drop to 3% or less for atoms heavier than nitrogen. More generally, it is suggested that only two postulates are needed within classical statistical mechanics to achieve equivalency of predictions with static, nonrelativistic quantum mechanics: First, quantum particles are modeled as Gaussian threads in four-dimensional thermal space and, second, pairs of threads (allowing for spin) are subject to classical excluded volume in the thermal space. It is shown that these two postulates in thermal space become the same as the Heisenberg uncertainty principle and the Pauli exclusion principle in three-dimensional space.