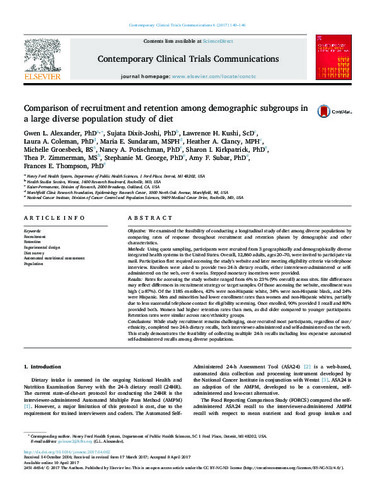 Comparison of recruitment and retention among demographic subgroups in a large diverse population study of diet.pdf (205.2Kb)

Objective We examined the feasibility of conducting a longitudinal study of diet among diverse populations by comparing rates of response throughout recruitment and retention phases by demographic and other characteristics. Methods Using quota sampling, participants were recruited from 3 geographically and demographically diverse integrated health systems in the United States. Overall, 12,860 adults, ages 20–70, were invited to participate via mail. Participation first required accessing the study's website and later meeting eligibility criteria via telephone interview. Enrollees were asked to provide two 24-h dietary recalls, either interviewer-administered or self-administered on the web, over 6 weeks. Stepped monetary incentives were provided. Results Rates for accessing the study website ranged from 6% to 23% (9% overall) across sites. Site differences may reflect differences in recruitment strategy or target samples. Of those accessing the website, enrollment was high (≥87%). Of the 1185 enrollees, 42% were non-Hispanic white, 34% were non-Hispanic black, and 24% were Hispanic. Men and minorities had lower enrollment rates than women and non-Hispanic whites, partially due to less successful telephone contact for eligibility screening. Once enrolled, 90% provided 1 recall and 80% provided both. Women had higher retention rates than men, as did older compared to younger participants. Retention rates were similar across race/ethnicity groups. Conclusions While study recruitment remains challenging, once recruited most participants, regardless of race/ethnicity, completed two 24-h dietary recalls, both interviewer-administered and self-administered on the web. This study demonstrates the feasibility of collecting multiple 24-h recalls including less expensive automated self-administered recalls among diverse populations.