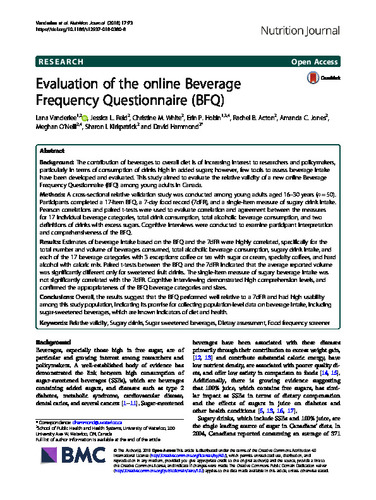 Background The contribution of beverages to overall diet is of increasing interest to researchers and policymakers, particularly in terms of consumption of drinks high in added sugars; however, few tools to assess beverage intake have been developed and evaluated. This study aimed to evaluate the relative validity of a new online Beverage Frequency Questionnaire (BFQ) among young adults in Canada. Methods A cross-sectional relative validation study was conducted among young adults aged 16–30 years (n = 50). Participants completed a 17-item BFQ, a 7-day food record (7dFR), and a single-item measure of sugary drink intake. Pearson correlations and paired t-tests were used to evaluate correlation and agreement between the measures for 17 individual beverage categories, total drink consumption, total alcoholic beverage consumption, and two definitions of drinks with excess sugars. Cognitive interviews were conducted to examine participant interpretation and comprehensiveness of the BFQ. Results Estimates of beverage intake based on the BFQ and the 7dFR were highly correlated, specifically for the total number and volume of beverages consumed, total alcoholic beverage consumption, sugary drink intake, and each of the 17 beverage categories with 3 exceptions: coffee or tea with sugar or cream, specialty coffees, and hard alcohol with caloric mix. Paired t-tests between the BFQ and the 7dFR indicated that the average reported volume was significantly different only for sweetened fruit drinks. The single-item measure of sugary beverage intake was not significantly correlated with the 7dFR. Cognitive interviewing demonstrated high comprehension levels, and confirmed the appropriateness of the BFQ beverage categories and sizes. Conclusions Overall, the results suggest that the BFQ performed well relative to a 7dFR and had high usability among this study population, indicating its promise for collecting population-level data on beverage intake, including sugar-sweetened beverages, which are known indicators of diet and health.