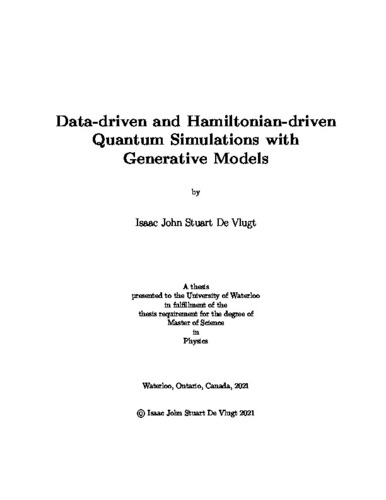 In the era of noisy intermediate-scale quantum devices (NISQ), a paradigm shift is occurring in the numerical physics community to transition towards developing algorithms that facilitate experimental realizations of quantum many-body systems. However, traditional numerical simulations may still be required to reach system sizes beyond that of current experiments and/or to expedite testing newly-developed algorithms intended for use in experiments. In this thesis, two machine learning algorithms that have been successfully employed for quantum state reconstruction, the restricted Boltzmann machine (RBM) and the recurrent neural network (RNN), are assessed based on their ability to reconstruct ground states of experimentally-relevant quantum many-body Hamiltonians, the XY model and nanomolecular assemblies (NMAs) of endofullerenes, using synthetic data. We show that training RBMs can be unstable compared to RNNs for the given learning tasks and that RNNs learn the underlying symmetries more accurately compared RBMs. For a closer connection to today's experiments, arrays of optically-controlled neutral atoms -- Rydberg atoms -- are subsequently investigated given their current prominence in experimental quantum computing. To generate synthetic Rydberg atom data for quantum state reconstruction, a Stochastic Series Expansion quantum Monte Carlo (QMC) algorithm is developed for ground states of Rydberg atoms on arbitrary lattices. By generating measurement data from this QMC algorithm across the checkerboard transition that exists on a square lattice, we compare the reconstruction accuracies of the RBM and RNN by estimating relevant ground state observables across the transition. We then propose using the RBM and RNN for estimating the second Renyi entropy, which is seemingly out of reach for the developed QMC algorithm and is highly non-trivial to obtain experimentally. There, we show that the RBM and RNN learn different aspects of the physics governing the checkerboard transition.