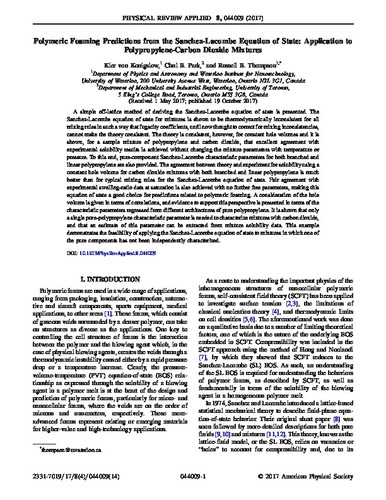 A simple off-lattice method of deriving the Sanchez-Lacombe equation of state is presented. The Sanchez-Lacombe equation of state for mixtures is shown to be thermodynamically inconsistent for all mixing rules in such a way that fugacity coefficients, until now thought to correct for mixing inconsistencies, cannot make the theory consistent. The theory is consistent, however, for constant hole volumes and it is shown, for a sample mixture of polypropylene and carbon dioxide, that excellent agreement with experimental solubility results is achieved without changing the mixture parameters with temperature or pressure. To this end, pure-component Sanchez-Lacombe characteristic parameters for both branched and linear polypropylene are also provided. The agreement between theory and experiment for solubility using a constant hole volume for carbon dioxide mixtures with both branched and linear polypropylene is much better than for typical mixing rules for the Sanchez-Lacombe equation of state. Fair agreement with experimental swelling-ratio data at saturation is also achieved with no further free parameters, making this equation of state a good choice for predictions related to polymeric foaming. A consideration of the hole volume is given in terms of correlations, and evidence to support this perspective is presented in terms of the characteristic parameters regressed from different architectures of pure polypropylene. It is shown that only a single pure-polypropylene characteristic parameter is needed to characterize mixtures with carbon dioxide, and that an estimate of this parameter can be extracted from mixture solubility data. This example demonstrates the feasibility of applying the Sanchez-Lacombe equation of state to mixtures in which one of the pure components has not been independently characterized.