Why do you ask? The effects of perceived motives on the effort that managers allocate toward delivering feedback 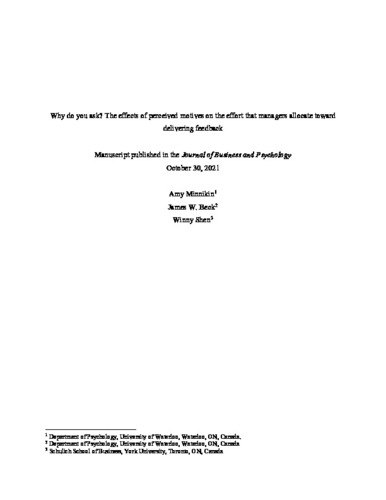 Although people are generally motivated to perform well at work, there is often ambiguity regarding whether they are meeting their organization’s standards. As such, people often seek feedback from others. To date, feedback-seeking research has emphasized the feedback seeker, identifying traits and circumstances associated with feedback-seeking, whereas far less is known about this process from the feedback source’s point of view. However, we expect that feedback sources will vary in their willingness to allocate effort toward delivering feedback. Specifically, integrating the cost-value framework of feedback with self-regulatory theories of goal prioritization, we predict that effort allocated toward a feedback episode is determined by the feedback source’s perceptions of the feedback seeker’s motives for seeking feedback. Across two complementary studies we found perceived instrumental motives (i.e., a desire to improve one’s performance) to be positively related to the amount of effort put toward delivering feedback, and perceived image enhancement motives (i.e., a desire to impress the feedback source) to be negatively related to effort allocation. Importantly, Study 1 was a field study in which managers were asked to report on a recent episode in which a subordinate had sought their feedback, and Study 2 used an experimental design in which feedback-seeking motives were manipulated. Thus, the current research makes an important contribution to the literature by considering the often overlooked role that the feedback source plays in the feedback process. Moreover, triangulation of both field and experimental data enhances both the external and internal validity of our conclusions.

Amy Minnikin, James W. Beck, Winny Shen (2021). Why do you ask? The effects of perceived motives on the effort that managers allocate toward delivering feedback. UWSpace. http://hdl.handle.net/10012/17695