Utilitarian Cops: Jeremy Bentham and The Rise of Modern Policing 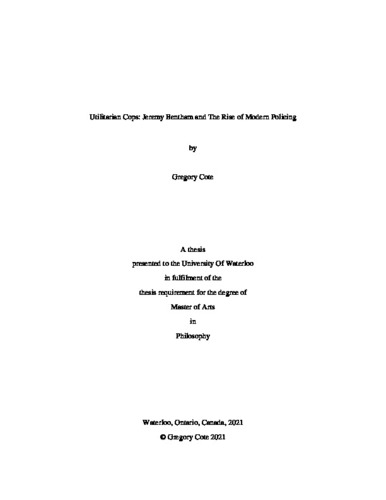 It is widely accepted that modern policing first came into existence with a bill passed in 1829, establishing the Metropolitan London Police under British Home Secretary Sir Robert Peel. It is Peel after all, who has been labeled the founder of modern policing, an English institution that inspired North American police. I argue that it was Jeremy Bentham who developed an early model of modern policing and whose work on applying his utilitarian philosophy to institutional reform directly influenced Peel’s innovation. I intend to show how Bentham and reformer Patrick Colquhoun established the first modern police department when they collaborated in drafting the Thames River Police Bill adopted by Parliament in 1800, almost thirty years before Peel’s legislation. It is the Thames River Police created by Bentham and Colquhoun that is the world’s oldest, not the Metropolitan London Police introduced by Peel. John Stuart Mill once wrote that Bentham was a great subversive. And as the great subversive whose years of work on improving police was often done in secret and whose efforts were largely ignored, it is Bentham not Peel, who should be considered the single most important figure in the development of modern policing.