An exploration of isolated vortex collisions 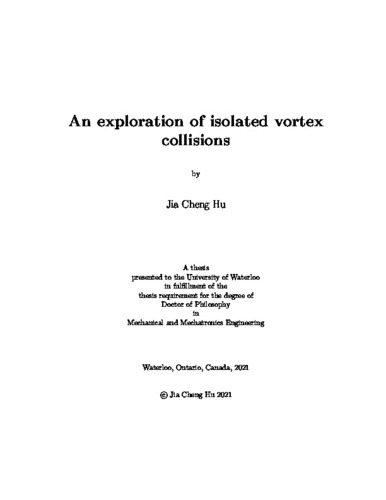 Vortices are ubiquitous in fluid dynamics, and their interactions are critical in various natural and engineering phenomena, such as the turbulence cascade and unsteady fluid loading on structures. This thesis focuses on the collision of isolated vortices to gain insights into the dynamics of vortex-structure and vortex-vortex interactions. Vortex rings are employed as the canonical vortex element in this study, and three main studies were conducted to address different aspect of the isolated vortex collision. First, the dynamics of a vortex ring advecting towards and interacting with a solid wall with a coaxial aperture is explored. The aperture is an axisymmetric surrogate of a thin plate tip to investigate the partial vortex-structure interaction. When the aperture radius is approximately equal to that of the ring, however, an interesting phenomenon is observed, wherein the hydrodynamic impulse of the vortex ring is enhanced up to an additional 11\% at the highest considered Reynolds number when comparing with a free vortex ring that experiences no collision (herein termed the ``vortex nozzle'' effect). Detailed investigation of the ``vortex nozzle'' illustrates that the impulse enhancement is a consequence of two complementary effects: (\textit{i}) fluid originating along the impact side of the wall is entrained into the ring, increasing its radius and volume; and (\textit{ii}) the circulation loss during the interaction with the aperture tip is minimized due to the vortex core enveloping the aperture tip. Second, the mechanism of viscous vortex reconnection is revisited by considering the collision of vortex rings over a range of initial collision angles and Reynolds numbers. While the overall reconnection process is similar to anti-parallel vortex reconnection, we find that collision angle exerts significant influence over the process, altering the evolution of various global and local quantities. The collision angle primarily manipulates the ``pyramid’’ process, but it is short-lived for viscous vortices. The present work shows that the ``pyramid’’ process is arrested by parallelization of the colliding vortices, wherein contact of the colliding vortices halts their motion towards each other at the pyramid apex, allowing the rest of the vortex tube to ``catch up’’, breaking the pyramid structure. Parallelization marks the transition to a second phase of stretching, where the colliding vortices remain parallel. Vorticity amplification from pyramid stretching is significantly stronger than its parallel counterpart and is thus the dominant factor determining reconnection properties. Critically, the Reynolds number scaling for the reconnection rate differs depending on the collision angle, which challenges the conjecture of universal Reynolds number scaling in the literature. Lastly, the evolution of a strained dipole is explored to under the deformation of vortex cores during the collision of anti-parallel vortices, which is a topic of recent debate in literature, and contribute to the understand of the turbulent cascade mechanism and possibility of finite-time singularity during anti-parallel vortex collision in inviscid flow. The results have shown that under an imposed strain flow, which mimics the strain experiences during anti-parallel vortex collision, a dipole can not maintain their compactness. Furthermore, the deformation of the vortex cores actually enhances the attract between the cores, which is absent in the theoretical modeling of anti-parallel vortex collision (the ``pyramid’’ process), and supports the idea that parallelization is the primary mechanism that ends the `pyramid’’ process.