Effect of polymer additives on transitioning and turbulent boundary layers 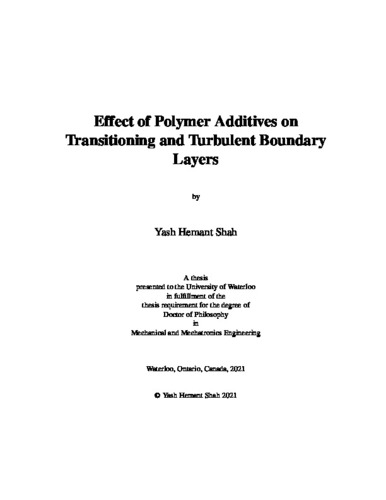 Injection of small quantities of polymer solutions in various internal and external turbulent flows can produce a substantial reduction of skin friction drag. This phenomenon, known as Toms phenomenon, has been actively studied in the past few decades and applied in various industrial flows to increase efficiency, decrease operating costs, and reduce emissions. A number of previous numerical studies have hypothesized that the long chains of polymer molecules interact with various turbulent motions thereby decreasing the turbulent fluctuations and reducing skin friction. The experimental investigations conducted in the present work provide a comprehensive understanding of the development of a polymer drag reduced boundary layer flow while providing critical insights into the polymer-turbulence interactions in both turbulent and bypass transitioning boundary layers. The outcomes are particularly applicable for the practical implementation of this flow control strategy on marine vehicles. The experiments are conducted in a specialized water tunnel facility by means of particle image velocimetry (PIV) and planar laser-induced fluorescence (PLIF) in a flat-plate boundary layer injected with polymer solutions via a tangentially inclined two-dimensional slot. The drag reducing effect of the heterogeneously distributed polymers on the flow development is characterized by contrasting the results against the baseline flow of water in each case. Critical questions with regards to the effect of the polymer concentration on the drag reduction performance in turbulent boundary layers are first addressed by considering three different concentrations of polyethylene oxide (PEO) covering a wide range of the drag reduction regime. The analysis of velocity and concentration measurements provides a link between the local polymer concentration, flow development, and achieved drag reduction. The changes in the slope of the logarithmic region of the velocity profiles are associated with various sub-regimes of drag reduction providing insights into the dominance of the viscous and inertial effects within the respective sub-regimes, which are important for the understanding of the ultimate limit of drag reduction. Further investigations are conducted using three-dimensional PIV measurements in the buffer and lower log regions of a drag reduced boundary layer, which elucidate the effect of polymer injection on various coherent structures in this region. The polymers are noted to dampen the turbulence producing motions, such as ejections and sweeps, which is illustrated through conditionally averaged flow fields. Accordingly, the Reynolds shear stress, a measure of turbulence production, is observed to be reduced in both cores of the structures and around the quasi-streamwise vortices, presenting an effect expected due to various viscoelastic mechanisms. The same trend is also observed to varying degrees within other frequently occurring coherent structures which are associated with the low-speed streaks, such as hairpin-like vortices, meandered streaks, and the precursors of streak breakdown events, confirming the importance of the polymer-turbulence interactions in turbulence control with this technique. The detailed planar and tomographic PIV measurements are further utilized for the characterization of extreme skin friction events which are largely associated with the low and high-speed streaks. Conditional averaged flow fields corresponding to the extreme events elucidate the polymer effect on the associated topology of the near-wall flow surrounding these events while signifying the dampening of large structures of Reynolds shear stress formed within the buffer layer. Further, a scale decomposition based analysis elucidates the effect of polymers on various length scales which are directly associated with the reduction in the Reynolds shear stress. The scale-decomposed conditional flow fields are further utilized to establish a quantitative measure of the association of the near-wall Reynolds shear stress with the skin friction, highlighting the effect of polymer injection on the phase differences between these quantities. Considering the substantial effects of the polymers particularly on the turbulence producing coherent structures, the effect of polymers on the transitional-turbulent motions within a bypass transitioning boundary layer are investigated using both planar PIV and PLIF. The effect of polymer injection is observed to accelerate the transition process in comparison to the baseline Newtonian flow depending on the location of injection with respect to a trip-wire. The acceleration of the transition process is observed via the increase in the amplification of velocity perturbations in the early transition stages which are dominated by Kelvin-Helmholtz instabilities. Characterization of the resulting flow development illustrates important differences in the trends of flow statistics and skin friction, highlighting the advantages and drawbacks of polymer injection within the transitional regime of the boundary layer.