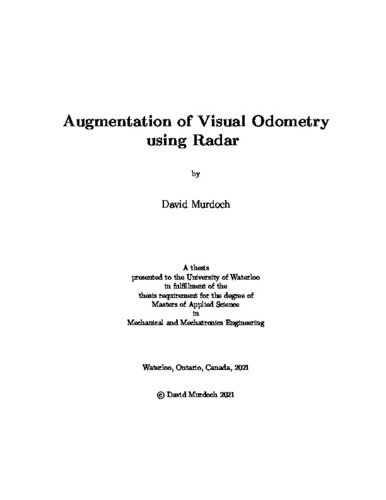 As UAVs become viable for more applications, pose estimation continues to be critical. All UAVs need to know where they are at all times, in order to avoid disaster. However, in the event that UAVs are deployed in an area with poor visual conditions, such as in many disaster scenarios, many localization algorithms have difficulties working. This thesis presents VIL-DSO, a visual odometry method as a pose estimation solution, combining several different algorithms in order to improve pose estimation and provide metric scale. This thesis also presents a method for automatically determining an accurate physical transform between radar and camera data, and in doing so, allow for the projection of radar information into the image plane. Finally, this thesis presents EVIL-DSO, a method for localization that fuses visual-inertial odometry with radar information. The proposed EVIL-DSO algorithm uses radar information projected into the image plane in order to create a depth map for odometry to directly observe depth of features, which can then be used as part of the odometry algorithm to remove the need to perform costly depth estimations. Trajectory analysis of the proposed algorithm on outdoor data, compared to differential GPS data, shows that the proposed algorithm is more accurate in terms of root-mean-square error, as well as having a lower percentage of scale error. Runtime analysis shows that the proposed algorithm updates more frequently than other, similar, algorithms.