Impacts of seismic line restoration on CO2, CH4, and biomass 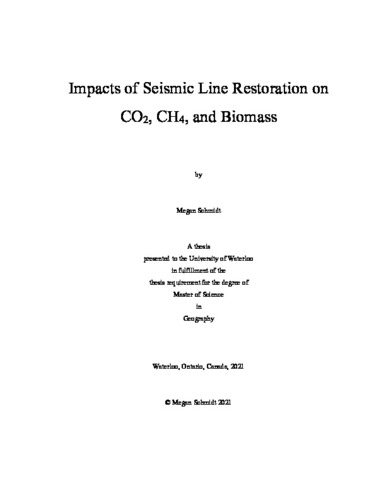 Oil and gas exploration has resulted in over 300,000 km of linear disturbances, known as seismic lines, throughout boreal peatlands across Canada. Sites are left with altered hydrologic and topographic conditions that prevent tree re-establishment. Restoration efforts have concentrated on tree recovery through mechanical mounding to re-create microtopography and support planted tree seedlings to block sightlines and deter predator use, but little is known about the impact of seismic line disturbance or restoration on peatland carbon cycling, vegetation, or biomass. This study looked at two mounding treatments: hummock transfer (HT), which transferred naturally formed hummocks from just off the seismic line onto the line, and inline mounding (IM), in which hummocks were formed by scooping peat from on the line and placing it nearby. We compared vegetation cover and composition, above- and belowground biomass, and carbon dioxide (CO2) and methane (CH4) fluxes on the treatments to untreated lines and natural reference areas in the first two years post-restoration. There were few significant differences in understory percent cover or biomass across treatments, but forb and graminoid cover increased, low shrub cover decreased, and bryophyte distribution across microforms differed on untreated seismic lines from natural reference areas. Both mounding treatments increased forb cover but reduced graminoid, shrub, and bryophyte cover from untreated and natural areas. Belowground root biomass did not significantly change between treatments, and we found that only IM significantly reduced understory biomass. The absence of trees and mid-story shrubs on all three seismic line treatments resulted in a loss of ~720 g m-2, and the loss of a yearly uptake of ~50 g C m-2 y-1. We found no significant differences in net ecosystem CO2 exchange, but untreated seismic lines were slightly more productive than natural reference areas and mounding treatments. Both restoration treatments increased ecosystem respiration, decreased net productivity by 6 – 21 g CO2 m-2 d-1, and created areas of increased CH4 emissions, including an increase in the contribution of ebullition, of up to 2000 mg CH4 m-2 d-1. Although further research on this site to assess the longer-term impacts of restoration, as well as application on other sites with varied conditions, is required to determine if these methods are effective, our study suggests that HT may provide the best option to improve the outcome of multiple ecosystem functions.