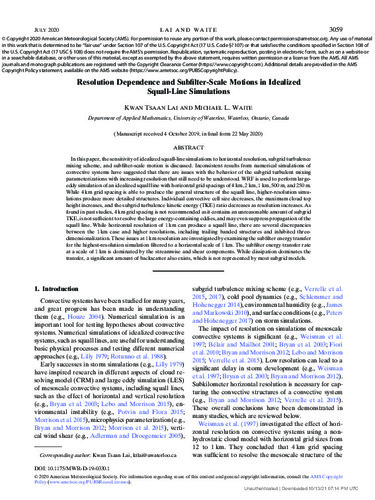 In this paper, the sensitivity of idealized squall-line simulations to horizontal resolution, subgrid turbulence mixing scheme, and subfilter-scale motion is discussed. Inconsistent results from numerical simulations of convective systems have suggested that there are issues with the behavior of the subgrid turbulent mixing parameterizations with increasing resolution that still need to be understood. WRF is used to perform large eddy simulation of an idealized squall line with horizontal grid spacings of 4 km, 2 km, 1 km, 500 m, and 250 m. While 4 km grid spacing is able to produce the general structure of the squall line, higher-resolution simu lations produce more detailed structures. Individual convective cell size decreases, the maximum cloud top height increases, and the subgrid turbulence kinetic energy (TKE) ratio decreases as resolution increases. As found in past studies, 4 km grid spacing is not recommended as it contains an unreasonable amount of subgrid TKE, is not sufficient to resolve the large energy-containing eddies, and may even suppress propagation of the squall line. While horizontal resolution of 1 km can produce a squall line, there are several discrepancies between the 1 km case and higher resolutions, including trailing banded structures and inhibited three dimensionalization. These issues at 1 km resolution are investigated by examining the subfilter energy transfer for the highest-resolution simulation filtered to a horizontal scale of 1 km. The subfilter energy transfer rate at a scale of 1 km is dominated by the streamwise and shear components. While dissipation dominates the transfer, a significant amount of backscatter also exists, which is not represented by most subgrid models.