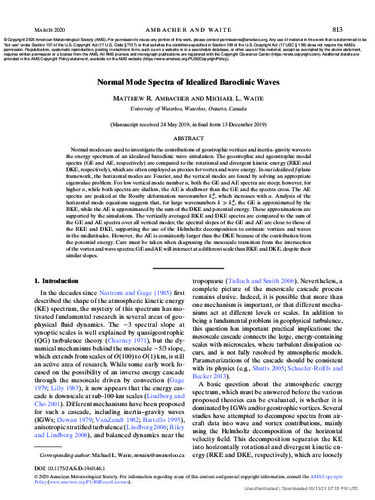 Normal modes are used to investigate the contributions of geostrophic vortices and inertia–gravity waves to the energy spectrum of an idealized baroclinic wave simulation. The geostrophic and ageostrophic modal spectra (GE and AE, respectively) are compared to the rotational and divergent kinetic energy (RKE and DKE, respectively), which are often employed as proxies for vortex and wave energy. In our idealized f-plane framework, the horizontal modes are Fourier, and the vertical modes are found by solving an appropriate eigenvalue problem. For low vertical mode number n, both the GE and AE spectra are steep; however, for higher n, while both spectra are shallow, the AE is shallower than the GE and the spectra cross. The AE spectra are peaked at the Rossby deformation wavenumber kR n , which increases with n. Analysis of the horizontal mode equations suggests that, for large wavenumbers k kR n , the GE is approximated by the RKE, while the AE is approximated by the sum of the DKE and potential energy. These approximations are supported by the simulations. The vertically averaged RKE and DKE spectra are compared to the sum of the GE and AE spectra over all vertical modes; the spectral slopes of the GE and AE are close to those of the RKE and DKE, supporting the use of the Helmholtz decomposition to estimate vortices and waves in the midlatitudes. However, the AE is consistently larger than the DKE because of the contribution from the potential energy. Care must be taken when diagnosing the mesoscale transition from the intersection of the vortex and wave spectra; GE and AE will intersect at a different scale than RKE and DKE, despite their similar slopes.