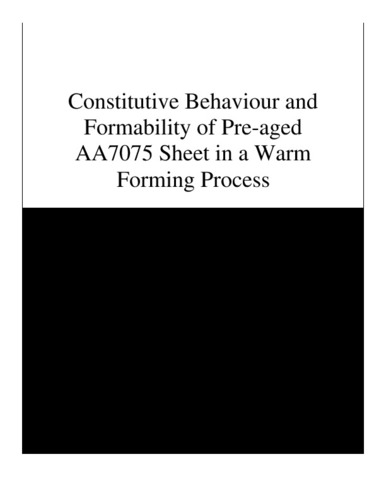 Warm constitutive and formability characterization of a high strength aluminum alloy (AA7075) was performed for a range of pre-aged (i.e. under-aged) tempers, strain rates and temperatures. The pre-aging processes were composed of a solution treatment process and a natural aging period of 2 days, followed by aging at temperatures of 80, 100 and 120 C for durations of 1, 2, and 4 hours. The peak-aged T6 temper condition was also considered for comparison purposes. Warm constitutive characterization was performed at strain rates of 0.01, 0.1, and 1 s-1, and temperatures of 150, 175 and 200 C. Room temperature and warm formability tests were performed using a Nakazima [1] tooling geometry with a plane strain specimen for the same temperatures, considering a range of tooling stroke rates from 0.5-63 mm/s. The formability results were assessed utilizing limit strains based on the ISO 12004-2:2008 [2] necking detection method, as well as the measured dome heights at failure. In addition, the effect of heating rate prior to elevated temperature constitutive and formability testing was considered. The room temperature constitutive results revealed that the pre-aged tempers exhibit superior work hardening response and elongation compared to the peak-aged T6 temper. However, serrated flow, attributed to PLC effects, was observed in the flow response of the tempers with reduced/insufficient pre-aging schedules (e.g. 1 hour at 80 and 100 C pre-age schedules). This behaviour induced a negative strain rate sensitivity and reduced the repeatability of the tensile flow response and room temperature formability limits. In response to elevated temperature deformation, the T6 tensile samples exhibited clear thermal softening effects. This response, however, was accompanied by early onset of diffuse necking, although the elevated temperature strain rate sensitivity is high which results in increased elongation to failure. The pre-aged tempers, in contrast, also responded positively to the thermal softening effect and exhibited a delay in the onset of diffuse necking, compared to T6. Interestingly, the elevated temperature strain rate sensitivity of the pre-aged tempers was quite low compared to the T6 samples, part of which is attributed to aging during the lower rate (longer duration) tensile tests. The room temperature formability results revealed improvements in forming limits with the pre-aged tempers, as compared to the peak-aged T6 temper. At elevated temperatures, thermal softening resulted in higher forming limits for all evaluated tempers, with the T6 temper at 200 C having the highest limit strain, closely followed by the 100 C 4 hour and 80 C 4 hour aged tempers formed at 175 C. Interestingly, the high limit strain exhibited by the warm formed T6 temper was not fully reflected in its limit dome height, since the early onset of diffuse necking prevented a globally uniform strain distribution along the surface of the specimen. In contrast, the pre-aged tempers in contrast resulted in superior dome height limits, which is attributed to their higher extent of work hardening prior to onset of diffuse necking. Both the tensile elongation and forming limit strains were shown to decrease with test speed. Further, the faster heating rates considered in this study resulted in mildly superior forming limits, since the extent of pre-aging during heating to the warm forming temperatures was reduced. A limited study on the hardness of the warm formed specimens before and after a paint bake cycle (PBC) revealed a notable increase in hardness values in response to the PBC for all tested conditions. Interestingly, the T6 temper exhibited a mild drop in hardness following warm forming, however, the loss in hardness was largely recovered after the PBC, which may be due to retrogression and re-aging effects. For the range of initial tempers and forming conditions considered herein, the specimens heat-treated at 100 C for 4 hours, and warm formed at 175 C (utilizing the rapid heating method) resulted in one of the best overall performances. This process route (evaluated at the slow forming speeds of 1 mm/s) resulted in an increase of approximately 42% in dome height (from 19 to 27 mm), and 77% in major limit strain (from 14.5 to 25.7%), compared to the room temperature limits of the T6 temper. Moreover, the repeatability of this process route proved to be superior compared to the majority of the other under-aged processing routes. In addition, the hardness values of this pre-aged temper, following warm forming and a paint bake cycle (PBC) were within 97% of the as-received T6 temper. Finally, a numerical model was devised, using the Hockett-Sherby [3] constitutive model to fit the warm tensile data. The numerical simulations demonstrated accurate predictions for the tensile experiments and fair predictions for the warm forming experiments.