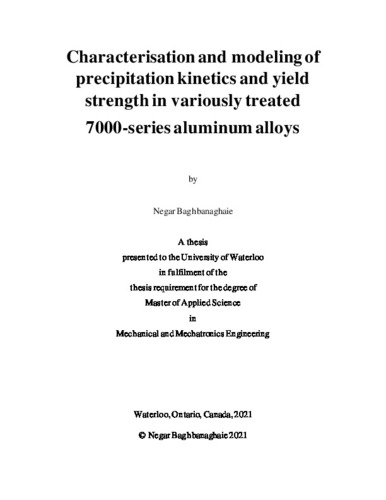 This thesis investigates the effects of: (a) various aging practices, and (b) deformation during a warm-forming cycle, on the precipitation hardening response and aging kinetics of AA7050 and AA7075, respectively. The investigations were conducted through an extensive experimental study and analytical modeling techniques. Two heat treatment routes were examined for AA7050: direct and multi-step aging. The direct aging considered exposing the as-quenched samples to temperatures of 150 and 177°C until the peak aged condition is achieved. The multi-step aging considered pre-aging of the as-quenched samples at 100°C for 4 hours, followed by final aging at 150 and 177°C until the peak-aged condition is identified. The precipitation behaviour and the mechanical properties of the as-quenched and pre-aged alloys were evaluated through differential scanning calorimetry (DSC) and hardness measurements. The comparative study of the DSC results showed that three precipitates, namely GP zones, η', and η precipitates, are the main precipitates that are formed during the considered artificial aging process routes. The combination of GP zones and η^' precipitates were suggested to be responsible for the maximum hardening at the peak aged condition. It was found that the material hardness is improved by conducting a pre-aging treatment before the final artificial aging process. This behavior was related to the formation of fine and closely-spaced GP zones during the pre-aging process which are beneficial for accelerated nucleation of higher amounts of η^' during the final artificial aging. The kinetics of precipitation were determined by conducting isothermal calorimetry (IC) experiments in the range of 135 to 190°C. Two thermal processing histories were studied for AA7075, starting with a pre-aging (PA) treatment, followed by either (a) final aging, or (b) warm forming of the pre-aged material (PA+WF), followed by final aging. In both cases, the final aging was performed at a typical automotive paint bake temperature, i.e. 177°C. The warm forming process for the PA+WF case was represented as a strain to 0.1 at a temperature of 150°C. The effect of deformation on the precipitation hardening response of the multi-step aged alloy was investigated by performing DSC and hardness tests on the PA and PA+WF materials. The combination of the hardness and calorimetry results suggested the potential dissolution of some pre-aging GP zones during the warm-forming stage which increases the solid solution hardening contribution in the as-deformed material. It was found that the hardness of the PA+WF material following final aging at 177°C is always higher than that of the PA material. It was proposed that this result can be due to strain hardening as well as the improvement in precipitation hardening in the presence of dislocations. The precipitation kinetics for the two processing histories were experimentally analysed through IC tests considering three temperatures (i.e. 150, 165 and 177°C). The results showed similar peak aging times (t_fvalues) for final aging of the deformed versus non-deformed materials for each of the final aging temperatures. The IC results were consistent with the hardness measurements which showed that the peak hardening for both deformed and non-deformed materials is achieved after 1 hour of aging at 177°C. It is suggested that this similarity in the peak aging time can be due to the offsetting factors that control the precipitation rate: (i) the presence of dislocations as well as the GP zone dissolution occurring during the WF stage (which increases the matrix supersaturation), both of which will tend to increase the precipitation rate; while, (ii) annihilation of vacancies by dislocations is likely operative and is expected to decrease the rate of precipitation in the PA+WF material. The measured kinetics and yield strength data for AA7050 was integrated within the models developed by Esmaeili [1], [2] to predict the precipitation behaviour for a broad range of aging histories. In order to expand the range of applicability of the yield strength predictions, in particular for a weak obstacle assumption, a new model was developed and validated that predicts the evolution of precipitate radius during concurrent nucleation and growth of precipitates. To simulate warm forming processes, the existing kinetic model due to Esmaeili [2] was extended to account for the effect of deformation on the precipitation kinetics. The improved kinetic model incorporates a theoretical description of the effect of dislocation core diffusion on the precipitation kinetics. In this respect, a simple relationship was also introduced to predict the dislocation density as a function of the imposed plastic strain. Finally, the yield strength evolution during multi-step aging processes coupled with an intermediate warm-forming stage was predicted, accounting for the summation of the precipitation and strain hardening strengthening mechanisms. The combined experimental and modeling results from the present work contribute to the area of process modeling of aluminum alloys for artificial aging with or without a deformation cycle. The work advances the understanding of the process-property-relationships for 7000-series aluminum alloys and provides a basis for industrial process and property optimization.