Statistical Muon Tracking: A Study of Cosmic Backgrounds in the PROSPECT Experiment 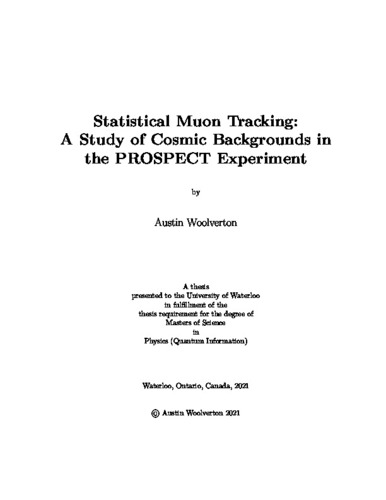 The Precision Reactor Oscillation and Spectrum Experiment (PROSPECT) has successfully demonstrated novel particle identification strategies with minimal protection from cosmic events. Located at the High Flux Isotope Reactor at Oak Ridge National Laboratories, PROSPECT was developed to investigate the fundamental physics of reactor neutrinos produced through the fission of Uranuim-235. Since it is located on Earth's surface, the detector experiences an enormous flux of cosmic backgrounds. These events are removed in the primary spectrum analysis by vetoing events after a muon. Additionally, the spectrum of background events is subtracted from the primary energy distribution. Many cosmic events may accidentally pass these subtractions. The work presented in this thesis attempts to characterize the cosmic background events observed in PROSPECT while exploring new muon trajectory reconstruction techniques. Due to the segmented design and location, the muon track reconstruction differs from more common likelihood methods used in Cherenkov detectors. Instead, a 4-dimensional principal component analysis strategy is implemented. This method has been extensively tested against Monte Carlo simulations and is used to predict the average track length of through-going muons. In addition, due to the limitations of the PROSPECT detector, more complex tracking routines are suggested. In addition, the PROSPECT experiment experiences low-energy cosmic events that are typically immeasurable by underground experiments. By exploiting its efficient pulse shaped discrimination strategy, correlations between muons and their secondary events are investigated. This thesis presents a new measurement of the neutron yield taken at ground level. Due to inconsistencies in modeling strategies, as well as its dependence on the total muon flux, the average amount of neutrons produced by cosmic events is widely debated within the low background physics community. An efficient measurement of the neutron yield at Earth's surface may, however, provide supplementary insight to the discussion.