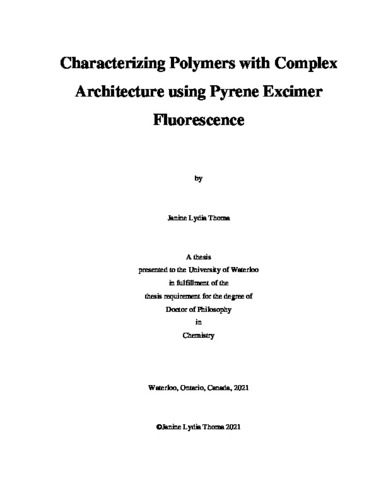 This thesis combines two different models, namely the model free analysis (MFA) and the fluorescence blob model (FBM), that were used to study the conformation and internal dynamics of two highly branched macromolecules, that were fluorescently labeled with the dye pyrene. Pyrene was selected due to its ability to form an excimer upon encounter between an excited and a ground-state pyrene. The effects of branching on the dynamics of the chain ends of 2,2-bis(hydroxymethyl)propionic acid backbone dendrons were first studied. Six generations of the dendrons, G(1)-G(6), were prepared with their terminal ends covalently labeled with a pyrenyl moiety (Pyx-G(N), x = 2N). The MFA was used to calculate the average rate constant <k> of excimer formation, which was found to be proportional to the local concentration of pyrene [Py]loc. To account for the presence of aggregated pyrenyl groups, whose contribution was found to be significantly larger for the G5 and G6 dendrons, <k> was divided by the fraction of pyrenyl groups forming excimer through diffusion, fdiff. <k> was found to depend on the solvent, due to different solvent viscosity and probability (p) of pyrene excimer formation (PEF). Consequently, different trends were obtained by plotting <k> as a function of [Py]loc in tetrahydrofuran (THF), toluene, N,N-dimethylformamide (DMF), and dimethylsulfoxide (DMSO). To account for these differences in <k> with solvent, the model compound ethyl 4-(1-pyrene)butyrate (PyBE) was prepared. The rate constant for PEF through diffusive intermolecular encounters, kdiff, was determined for PyBE in each of the 4 solvents and used to normalize <k>. <k>/fdiff×kdiff–versus–[Py]loc was then plotted and the data in each of the 4 solvents collapsed onto a single master trend, which passed through the origin, thus confirming the direct relationship between <k> and [Py]loc and suggesting that the dendron side chains obeyed Gaussian statistics. The chain end dynamics of a polymer with a different branching architecture, namely polymeric bottle brushes (PBBs), were then investigated. Four poly(oligo(ethylene glycol) methyl ether methacrylates) (P(PyEGyMA), y = 3, 5, 8, and 12) with side chain lengths containing 12, 18, 27, and 39 atoms, respectively, were end-labeled with a 1-pyrenemethoxy group. <k> was then determined in THF, DMF, dioxane, and DMSO. [Py]loc was calculated assuming that each side chain probed a spherical blob, whose diameter was represented by the end-to-end distance of the side chains, ree,SC, assuming a Gaussian conformation in solution with ree,SC = n0.5×l. The model compound 1-pyrenemethoxy di(ethylene glycol) methyl ether (PyEG2ME) was synthesized and kdiff was determined to normalize for solvent viscosity and p. A plot of <k>/fdiff×kdiff–versus–[Py]loc was considered again and the data obtained in THF, DMF, and dioxane were found to converge onto a single trend. Unfortunately, DMSO was found to be too polar to study the fully pyrene labeled P(PyEGyMA) PBBs, and it is believed that the hydrophobic pyrene pendant was not fully solvated and resided closer to the polymethacrylate (PMA) main chain. Excellent agreement was found when comparing the results obtained between the PBBs and the dendrons, even though the two families of macromolecules exhibited a very different branching architecture. The PBB architecture was then investigated in more detail in organic and aqueous environments. A series of poly(oligo(ethylene glycol) methyl ether methacrylate) PBBs were synthesized by randomly copolymerizing an oligo(ethylene glycol) methyl ether methacrylate with penta(ethylene glycol) 1-pyrenemethyl ether methacrylate) to yield a series of PyEG5-PEGnMA samples, where n = 0, 3, 4, 5, 7, 9, and 19). The change in main chain flexibility in organic solvents was probed as a function of increasing side chain length using the FBM. The FBM retrieves the number of structural units, Nblob, encompassed per unit volume or blob. As the side chain length of a PBB increases, there is an increase in steric repulsion between the side chains, which causes stiffening of the polymer main chain. This increase in polymer stiffness is reflected by a decrease in Nblob and an increase in the persistence length, lp, of the PBBs. In an attempt to quantify the change in Nblob with increasing side chain length, a blob-based approach was suggested, which combines the FBM and the Kratky-Porod worm like chain (KPWLC) model to obtain lp. The lp values obtained from the FBM approach were plotted as a function of the number of atoms, NS, in the side chain, where it was found that lp increased linearly with NS^2, as had been proposed theoretically. lp was also determined from conformation plots based on intrinsic viscosity using gel permeation chromatography (GPC). Using a Bohdanecky linearization, the lp was extracted from the GPC traces and found to be 1.8 times larger than the lp found using the FBM. This discrepancy was attributed to the difference in length scales probed by each technique. The PyEG5-PEGnMA PBBs were then studied in an aqueous solution to investigate the shielding effects afforded by the oligo(ethylene glycol) side chains of PBBs to the hydrophobic pyrenyl groups. The FBM was used to investigate the level of aggregation of the pyrenyl moieties as well as the effect that the side chain length had on shielding pyrene from the aqueous environment. The change in the volume probed by pyrene was studied using Nblob obtained from the FBM of the fluorescence decays and comparing the results obtained in organic solvents, where both the polymer and pyrene were fully soluble, to those obtained in an aqueous solution, where the polymer is soluble but pyrene is only slightly soluble. When compared to a series of poly(alkyl methacrylates) labeled with a shorter 1-pyrenebutyl methacrylate linker, the Nblob values obtained for PyEG5-PEGnMA PBBs in water were found to overlap perfectly. These results suggested that even though pyrene is attached onto a 16 atom-long linker, it can only probe a volume similar to that afforded by a 4 atom-long linker in water. This study also indicated that the oligo(ethylene glycol) side chains of the PBBs generate an organic-like environment around the main chain, that shields the hydrophobic pyrenyl labels from interacting with the aqueous phase.