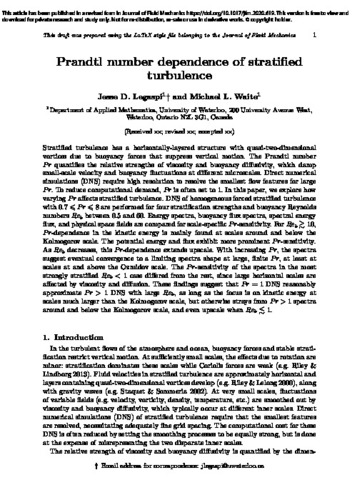 Stratified turbulence has a horizontally layered structure with quasi-two-dimensional vortices due to buoyancy forces that suppress vertical motion. The Prandtl number Pr quantifies the relative strengths of viscosity and buoyancy diffusivity, which damp small-scale velocity and buoyancy fluctuations at different microscales. Direct numerical simulations (DNS) require high resolution to resolve the smallest flow features for large Pr . To reduce computational demand, Pr is often set to 1. In this paper, we explore how varying Pr affects stratified turbulence. DNS of homogeneous forced stratified turbulence with 0.7≤Pr≤8 are performed for four stratification strengths and buoyancy Reynolds numbers Reb between 0.5 and 60. Energy spectra, buoyancy flux spectra, spectral energy flux and physical space fields are compared for scale-specific Pr -sensitivity. For Reb≳10 , Pr -dependence in the kinetic energy is mainly found at scales around and below the Kolmogorov scale. The potential energy and flux exhibit more prominent Pr -sensitivity. As Reb decreases, this Pr -dependence extends upscale. With increasing Pr , the spectra suggest eventual convergence to a limiting spectrum shape at large, finite Pr , at least at scales at and above the Ozmidov scale. The Pr -sensitivity of the spectra in the most strongly stratified Reb<1 case differed from the rest, since large horizontal scales are affected by viscosity and diffusion. These findings suggest that Pr=1 DNS reasonably approximate Pr>1 DNS with large Reb , as long as the focus is on kinetic energy at scales much larger than the Kolmogorov scale, but otherwise stray from Pr>1 spectra around and below the Kolmogorov scale, and even upscale when Reb≲1 .