Food Insecurity and Mental Health among Females in High-Income Countries 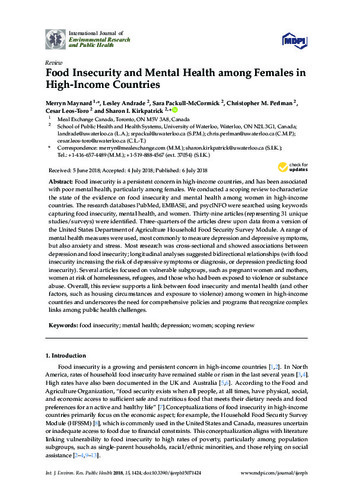 Food insecurity is a persistent concern in high-income countries, and has been associated with poor mental health, particularly among females. We conducted a scoping review to characterize the state of the evidence on food insecurity and mental health among women in high-income countries. The research databases PubMed, EMBASE, and psycINFO were searched using keywords capturing food insecurity, mental health, and women. Thirty-nine articles (representing 31 unique studies/surveys) were identified. Three-quarters of the articles drew upon data from a version of the United States Department of Agriculture Household Food Security Survey Module. A range of mental health measures were used, most commonly to measure depression and depressive symptoms, but also anxiety and stress. Most research was cross-sectional and showed associations between depression and food insecurity; longitudinal analyses suggested bidirectional relationships (with food insecurity increasing the risk of depressive symptoms or diagnosis, or depression predicting food insecurity). Several articles focused on vulnerable subgroups, such as pregnant women and mothers, women at risk of homelessness, refugees, and those who had been exposed to violence or substance abuse. Overall, this review supports a link between food insecurity and mental health (and other factors, such as housing circumstances and exposure to violence) among women in high-income countries and underscores the need for comprehensive policies and programs that recognize complex links among public health challenges.