Gaps in the Evidence on Population Interventions to Reduce Consumption of Sugars: A Review of Reviews 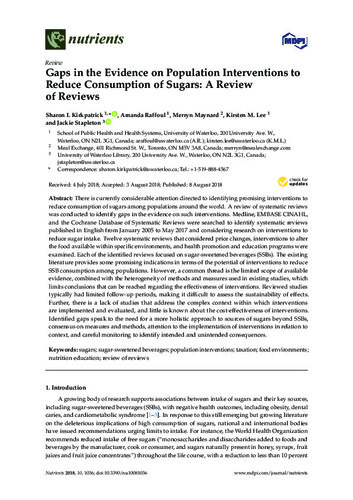 There is currently considerable attention directed to identifying promising interventions to reduce consumption of sugars among populations around the world. A review of systematic reviews was conducted to identify gaps in the evidence on such interventions. Medline, EMBASE CINAHL, and the Cochrane Database of Systematic Reviews were searched to identify systematic reviews published in English from January 2005 to May 2017 and considering research on interventions to reduce sugar intake. Twelve systematic reviews that considered price changes, interventions to alter the food available within specific environments, and health promotion and education programs were examined. Each of the identified reviews focused on sugar-sweetened beverages (SSBs). The existing literature provides some promising indications in terms of the potential of interventions to reduce SSB consumption among populations. However, a common thread is the limited scope of available evidence, combined with the heterogeneity of methods and measures used in existing studies, which limits conclusions that can be reached regarding the effectiveness of interventions. Reviewed studies typically had limited follow-up periods, making it difficult to assess the sustainability of effects. Further, there is a lack of studies that address the complex context within which interventions are implemented and evaluated, and little is known about the cost-effectiveness of interventions. Identified gaps speak to the need for a more holistic approach to sources of sugars beyond SSBs, consensus on measures and methods, attention to the implementation of interventions in relation to context, and careful monitoring to identify intended and unintended consequences.