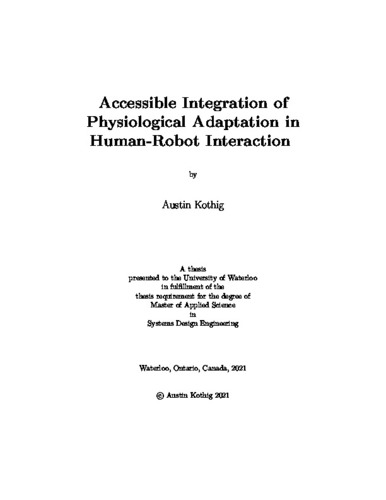 Technological advancements in creating and commercializing novel unobtrusive wearable physiological sensors have generated new opportunities to develop adaptive human-robot interaction (HRI). Detecting complex human states such as engagement and stress when interacting with social agents could bring numerous advantages to creating meaningful interactive experiences. Bodily signals have classically been used for post-interaction analysis in HRI. Despite this, real-time measurements of autonomic responses have been used in other research domains to develop physiologically adaptive systems with great success; increasing user-experience, task performance, and reducing cognitive workload. This thesis presents the HRI Physio Lib, a conceptual framework, and open-source software library to facilitate the development of physiologically adaptive HRI scenarios. Both the framework and architecture of the library are described in-depth, along with descriptions of additional software tools that were developed to make the inclusion of physiological signals easier for robotics frameworks. The framework is structured around four main components for designing physiologically adaptive experimental scenarios: signal acquisition, processing and analysis; social robot and communication; and scenario and adaptation. Open-source software tools have been developed to assist in the individual creation of each described component. To showcase our framework and test the software library, we developed, as a proof-of-concept, a simple scenario revolving around a physiologically aware exercise coach, that modulates the speed and intensity of the activity to promote an effective cardiorespiratory exercise. We employed the socially assistive QT robot for our exercise scenario, as it provides a comprehensive ROS interface, making prototyping of behavioral responses fast and simple. Our exercise routine was designed following guidelines by the American College of Sports Medicine. We describe our physiologically adaptive algorithm and propose an alternative second one with stochastic elements. Finally, a discussion about other HRI domains where the addition of a physiologically adaptive mechanism could result in novel advances in interaction quality is provided as future extensions for this work. From the literature, we identified improving engagement, providing deeper social connections, health care scenarios, and also applications for self-driving vehicles as promising avenues for future research where a physiologically adaptive social robot could improve user experience.