Skipping Through the Shadowlands: Exploring the Relationship between Game Narrative and Player Experience in World of Warcraft 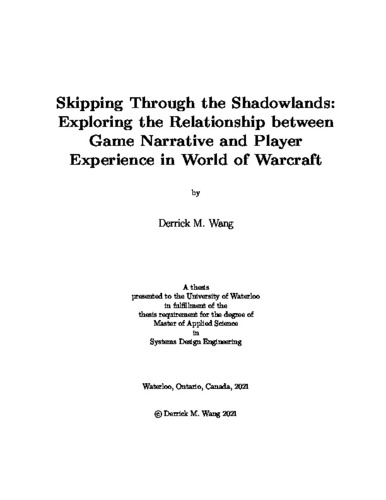 Video games feature narratives in non-traditional formats, such as fragments mixed in with gameplay and spread across the game environment and even the real world. These fragments connect with each other. They form a system delivering the overarching story. Although game narratives have been well-studied in both academia and industry, the relationship between game narratives and player experience yet remains underdeveloped. Many games allow players to skip narratives, but it is uncertain what impact skipping parts of the narrative (therefore missing the information) may have on the player experience of a game. In this thesis, I propose a structured overview of narrative systems consisting of 11 non-interactive narrative forms currently existing in World of Warcraft (WoW) -- namely a hierarchical distinction between in-game (i.e., internal) and out-of-game (i.e., external) narratives. I conducted an online survey study among WoW players to learn about their experience and preference for the game's narrative. More importantly, I investigated whether and why they choose to skip narratives in the game. WoW served as a perfect game example for this study because it is centered on narrative but still playable without. It features fragmented storytelling on a pre-written overarching narrative, scattered in many distinct narrative forms both inside and out of the game. Moreover, almost all gameplay elements WoW features can be found in other game genres that include narrative. Thus, it is possible to extrapolate findings from this study to other games. I discovered that players generally acknowledge the existence of all 11 narrative forms in WoW and have clear preferences and reasons to consume or skip each form. These results strongly support my proposed hierarchy of narrative forms, suggesting that game designers should prioritize narrative forms featuring higher-fidelity assets such as film-grade, lifelike cinematic cutscenes when designing fragmented narratives, and have back-up plans (to repeat narrative arcs) in case players miss key information that affects gameplay.

Derrick Wang (2021). Skipping Through the Shadowlands: Exploring the Relationship between Game Narrative and Player Experience in World of Warcraft. UWSpace. http://hdl.handle.net/10012/17454