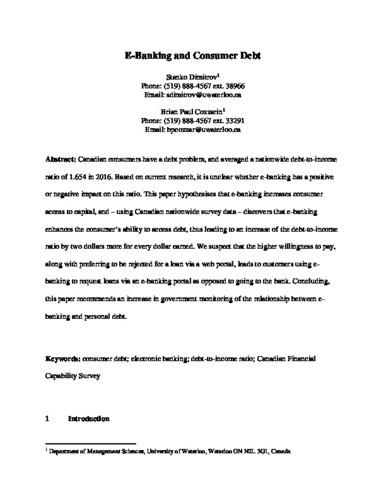 Canadian consumers have a debt problem and averaged a nationwide debt-to-income ratio of 1.654 in 2016. Based on current research, it is unclear whether e-banking has a positive or negative impact on this ratio. This paper hypothesises that e-banking increases consumer access to capital, and - using Canadian nationwide survey data - discovers that e-banking enhances the consumer's ability to access debt, thus leading to an increase of the debt-to-income ratio by two dollars more for every dollar earned. We suspect that the higher willingness to pay, along with preferring to be rejected for a loan via a web portal, leads to customers using e-banking to request loans via an e-banking portal as opposed to going to the bank. Concluding, this paper recommends an increase in government monitoring of the relationship between e-banking and personal debt.