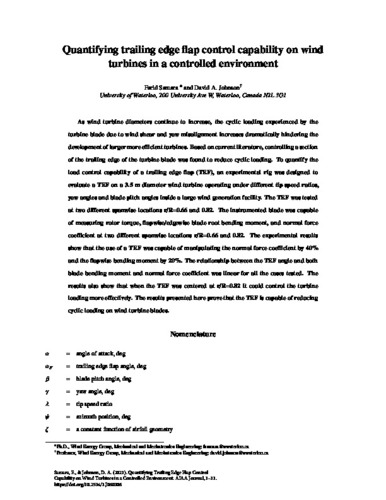 As wind turbine diameters continue to increase, the cyclic loading experienced by the turbine blade due to wind shear and yaw misalignment increases dramatically hindering the development of larger more efficient turbines. Based on current literature, controlling a section of the trailing edge of the turbine blade was found to reduce cyclic loading. To quantify the load control capability of a trailing edge flap (TEF), an experimental rig was designed to evaluate a TEF on a 3.5 m diameter wind turbine operating under different tip speed ratios, yaw angles and blade pitch angles inside a large wind generation facility. The TEF was tested at two different spanwise locations r/R=0.66 and 0.82. The instrumented blade was capable of measuring rotor torque, flapwise/edgewise blade root bending moment, and normal force coefficient at two different spanwise locations r/R=0.66 and 0.82. The experimental results show that the use of a TEF was capable of manipulating the normal force coefficient by 40% and the flapwise bending moment by 20%. The relationship between the TEF angle and both blade bending moment and normal force coefficient was linear for all the cases tested. The results also show that when the TEF was centered at r/R=0.82 it could control the turbine loading more effectively. The results presented here prove that the TEF is capable of reducing cyclic loading on wind turbine blades.