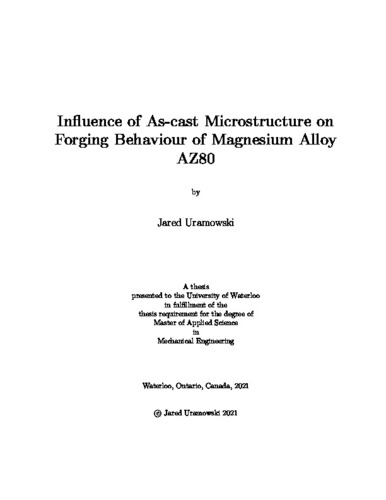 Concerns over the environment and greenhouse gas emissions have incentivized the increased use of lightweight metals, such as magnesium alloys, to improve vehicle efficiency through a reduction in mass. While there are some current applications of magnesium alloys in the automotive industry, further adoption will see their use in areas with more structural components, such as chassis and suspension. To meet the strength and fatigue requirements of a structural automotive component however, the mechanical properties must be improved through hot forging. Research has shown the mechanical properties of forged magnesium to rely on the grain size, grain orientation, and internal defects, of the as-cast starting material. The current research is part of a Natural Sciences and Engineering Research Council of Canada’s Strategic Partnership Grant, and is conducted at the University of Waterloo. The intent of this project is to produce an automotive suspension control arm for a Ford Fusion car, through casting and forging of the AZ80 alloy. In this research, a spatially optimized forging pre-form shape will be cast, such that the forging process and mechanical properties will be optimized upon forging. Therefore, more consideration is given to the production of the AZ80 castings and their starting structure, as well as their forging behaviour. This research focuses on the influence of the as-cast microstructure on the forging behaviour and microstructure evolution of the AZ80 magnesium alloy. Forging behaviour is evaluated by measuring the compressive stress, evolution of microstructure during deformation, and susceptibility to cracking during deformation. A particular emphasis is placed on the effect of the cooling rate during solidification on subsequent forgeability. Two casting moulds were used to produce material for this project: a wedge casting mould and a cylinder casting mould. The wedge casting enabled the study of the cooling rate, while the cylinder casting mould enabled the study of the homogenization treatment. The microstructure effects of cooling rate, and its subsequent influence on the compressive stress and deformation behaviour, are explored. This includes effects of both grain size and morphology of the Mg₁₇Al₁₂ intermetallic phase. The use of a homogenization heat treatment to improve the forgeability of the AZ80 castings is also studied. In all cases, the hot compression behaviour was studied using a Gleeble™ 3500 thermal-mechanical simulator, available at the University of Waterloo, by uniaxial compression testing. Samples were characterized primarily through optical microscopy analysis. The results show that the forging behaviour is dependent on the microstructure of the initial cast material. Samples cast with a higher cooling rate saw a more refined grain structure, inducing a higher peak stress during compression testing. The cooling rate is also found to influence the Mg₁₇Al₁₂ phase morphology. Slower cooling rates during the later stages of solidification showed a higher amount of precipitated Mg₁₇Al₁₂, and less of the eutectic Mg₁₇Al₁₂. The presence of these precipitates also has an influence on the forging behaviour, whereby more dynamic recrystallization may occur during deformation. A heat treatment of 420°C, held for 24 hours, was sufficient for what is believed to be a near-full homogenization of the AZ80 microstructure. Homogenized samples retained their relative grain size effects on the compressive stress from the solidification cooling rate, however the amount of dynamic recrystallization which occurred during deformation was increased. This resulted in a high amount of dynamic softening following the peak compressive stress, which translates to a reduction in compressive stress at elevated strains, compared to the cast material. Finally, the porosity that is often inherent to castings was not found to significantly affect the compressive stress of the material. However, samples with a high amount of porosity had a higher tendency to crack under high strains, making them less suitable for forging. This knowledge will help to determine the optimal cast material structure that will enable structural components upon forging.